Pfizer raises average wholesale price of 148 drugs by 6-13.5 per cent 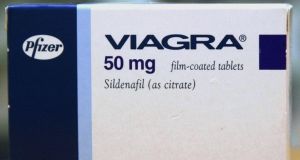 Pfizer, which makes erectile dysfunction treatment Viagra, raised the average wholesale price of 148 drugs by between 6 and 13.5 per cent.

Pharma firms have imposed price rises of several times the rate of inflation on more than 1,000 products in the United States, a new year move that risks a political backlash at a time of intense scrutiny on healthcare costs.

Pfizer, the largest stand-alone pharmaceutical company in the US, raised the average wholesale price of 148 drugs by between 6 and 13.5 per cent, according to data, with a mean average increase of 8.8 per cent.

The list included several of its best-known medicines such as Viagra, the erectile dysfunction treatment made in Cork, and Lyrica for nerve pain.

Other large drugmakers, including Allergan, GlaxoSmithKline, Gilead, Shire, Biogen, Teva, Baxter and Viiv also increased the US list prices of their medicines on January 1st, according to the data.

For the most part, pharmaceutical companies held the increases at less than 10 per cent, but they still tracked well ahead of inflation, currently 2.2 per cent in the US.

Some pharmaceutical groups implemented much larger increases. Hikma, the London-listed drugmaker, raised the price of several strengths of morphine – which was first marketed in the 1800s – by between 75 and 90 per cent, taking a 25-pack of vials from $30 (€24.50) to $58 (€50).

Rx Savings Solutions, which makes software to help people lower the cost of prescription medicines, said it had recorded price increases on more than 1,300 products on the first day of the year.

“If GM raised the price of their trucks by four times the rate of inflation for multiple years, they wouldn’t sell any trucks,” said Michael Rea, chief executive of Rx Savings. “The inelastic market of pharmaceuticals continues to be stretched to new levels.”

The decision by pharmaceutical groups to raise the price of so many products is a gamble given the intense focus on drug costs in the US, the world’s largest and most profitable healthcare market.

The issue has been at the forefront of public debate since the presidential campaign, when Hillary Clinton targeted Martin Shkreli, the disgraced biotech entrepreneur, for raising the price of an Aids and cancer medicine by 5,000 per cent.

President Donald Trump has also criticised the industry since winning election, accusing it of “getting away with murder” by charging high prices. – Copyright The Financial Times Limited 2018

1 AIB concedes Covid mortgage policy was ‘regrettable’
2 ‘No demand... because there are no people’ at well-known Dublin pub
3 Revised help-to-buy scheme opens for applications
4 Divorce: What will it cost and can you afford it?
5 Transferring the family farm without a tax headache
6 Nearly 30,000 could lose pandemic payment if they do not confirm eligibility
7 How to . . . move (almost) everything to your new phone
8 New Twitter settings allow users choose who can reply to their tweets
9 ‘Saudi Arabia is where the opportunities will happen in future’
10 Mandarins scramble to replace dodgy figures
Real news has value SUBSCRIBE