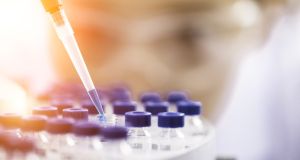 Wasdell will establish a packaging, test and distribution centre in Dundalk with the support of the IDA. Photograph: iStock

Wasdell said it hopes to potentially double that number of new roles, but in the first instance would lodge planning permission associated with an IDA greenfield site in Dundalk with a view to starting production in October 2018.

Wasdell will establish a packaging, test and distribution centre in Dundalk with the support of the IDA.

Martin Tedham, managing director of the Wasdell Group said they had also looked at the Netherlands and Denmark before deciding on Ireland and the availability of a workforce and labour skills in the area was a major factor in their selecting Dundalk.

“The IDA gave us all the figures we needed and [information] on the skills and colleges, and also we are not in Dublin but we are not far away either.”

He said he hoped that people from the community “now instead of commuting in to Dublin will have a job in their area.”

Positions available include “business packaging, running machines, forklift drivers, warehouse managers; it is not the high-end people we are after, we are just looking for people who would like a job and to get working.”

He said there is enough land so that once this project is up and running they will have room to expand and potentially double the number of jobs.

The announcement was made by Minister of State for Employment and Small Business Pat Breen who said, “We have a very good pharma industry in this country and it is an indication of how strong the sector is and I believe it will attract more industry into Ireland.”

Separately, the San Diego and Dublin-based Md7 said its 40 new roles, which effectively double its Irish presence, would help drive its European growth. The roles are understood to be support jobs, all requiring third-level education.

Commenting on the expansion, Md7 international president Mark Christenson said: “Md7’s decision to continue to invest in in Ireland reflects our positive experience to date, the ease of doing business in Ireland and easy access to a talented multilingual workforce.”