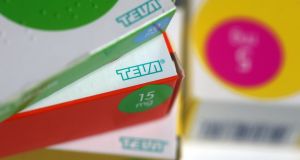 Teva has been struggling of late, as pressure from both rivals and customers has grown. Photograph: Bloomberg

Teva Pharmaceutical’s US-listed shares received a shot in the arm on Friday following a report that the struggling Israeli drugmaker could be looking to cut up to 10,000 jobs in a bid to reduce costs and pay down its debt pile.

Teva employs some 500 people in Ireland, between operations in Waterford and Dundalk, Co Louth.

The report also added the company is aiming to cut operating costs by $1.5 billion to $2 billion over the next two years and is not planning to move ahead with an equity offering in the near term.

The world’s largest maker of copycat drugs, Teva has seen its shares shed more than 55 per cent of their value over the past 12 months amid rising competition from rival drugmaker and growing price pressure from buyers who are demanding larger discounts.

1 Bank leaked my loan request to family who tried to rip me off
2 Over $12m from sale of Walford handed over in Sean Dunne bankruptcy case
3 Ryanair and Aer Lingus monitor impact of coronavirus on travel to Italy
4 UK lays down red line for Brexit trade talks
5 EU and British positions harden ahead of Brexit talks
6 Boris Johnson's new immigration regime will damage much more than industry
7 Digicel’s earnings rise as it looks towards refinancing $1.3bn of bonds
8 Wall St falls sharply as coronavirus fears surge
9 Mastercard to create 1,200 new jobs by expanding base in Dublin
10 Some €436bn wiped off European stocks as coronavirus fears increase
Real news has value SUBSCRIBE