Yves Rocher closure will result in the loss of 60 jobs 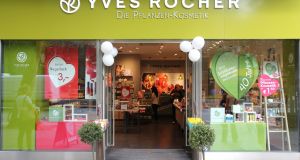 The Government and IDA Ireland have been urged to renew their efforts to create new jobs for the northside of Cork city following the announcement of the planned closure of the Yves Rocher skincare plant with the loss of 60 jobs.

The company said that, following an extensive review of its operations, prompted by falling global volumes in recent years, Groupe Roche Operations had taken the decision to consolidate its manufacturing at its Brittany base. That meant closure for it site in Cork.

Last year the Yves Rocher plant shed nearly half of its workforce, with 50 job losses. At that time, the company moved two of its production lines to Rieux in Brittany, which was operating under capacity. The company cited the cost of shipping as a reason for its decision.

Now it says it will cease operations at the Dublin Hill plant altogether by the end of the next year, transferring the production in its entirety to France.

The Cork plant is the main producer for strategic Yves Rocher brands such as Riche Creme Pure Calmille, Arnica and Serum Vegetale.

The group commenced operations in Cork in 1981 and established its Dublin Hill facility in 1984.

At the last major investment in the Cork plant in 2010, the president of the privately-owned Yves Rocher Foundation, Jacques Rocher, said the Cork facility had been a key element of the Yves Rocher network since its establishment.

In a statement on Monday, the company thanked Cork employees for their “dedication, commitment and performance in the face of numerous challenges in recent years”.

Local Fianna Fáil councillor Kenneth O’Flynn says the closure is a major blow to the area, which, he insists, was being neglected by the Government.

“Yves Rocher have been a great employer in the northside for 37 years and they have been very good to the people of Cork. They have been generous. But the writing has been on the wall for the last few years.”

He called on the Government and the IDA to step up its efforts at securing a replacement industry for Yves Rocher.

“I am also asking them to look at a special designation for the northside as it is clear that our area has been left behind in the overall Government thinking on developing Cork.”