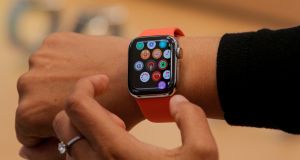 Apple wants to collect healthcare data from customers by harvesting information from its base of Apple Watch and iPhone users through the Research app. Photograph: Brendan McDermid/Reuters

Apple is racing to collect healthcare data from its customers, launching a new research app that it claims will “advance science” by harvesting information from its huge base of iPhone users and Apple Watch wearers.

The world’s largest company by market value is hoping millions of users will opt in to its new Research app and participate in an array of medical studies that rely on its electrocardiogram sensor, decibel meter and menstrual cycle-tracking functions.

Those studies could, in turn, generate outcomes that Apple would then use to build new products.

The announcement comes as big tech companies, led by Apple, Google and Amazon, are pushing into healthcare in myriad ways, trying to use their massive computing power and expertise in data analytics and sensors to disrupt the industry, cut costs and make new discoveries.

But the companies are also coming under increasing scrutiny for their use of health information. On Tuesday, the US government said that it was probing whether Google broke privacy laws on healthcare data in a cloud computing project with Ascension, the country’s second-largest healthcare system, after a report in the Wall Street Journal. Google said it had complied with the regulations.

Apple has increasingly been looking at ways to encourage activity and monitor health, with chief executive Tim Cook saying that in the future it would become clear that the company’s “greatest contribution to mankind” will be in healthcare.

The company is hoping it can differentiate itself from rivals thanks to its nearly billion iPhone users – and a “privacy first” business model that is not reliant on advertising.

The new app declares that “privacy is a fundamental human right”. It allows users to control whether they participate, which studies they join, and stay informed about the results. The app says no data will be sold to third parties.

The push follows the 2014 launch of ResearchKit, an open-source platform that lets researchers recruit participants for a wide array of studies. The best known is Apple’s “heart study”, a Stanford-led research project that identified irregular heart rhythms using data from more than 400,000 users of the Apple Watch.

Three research projects launching on Thursday will study women’s health, heart and movement, and hearing. Apple’s partners in these projects are the Harvard TH Chan School of Public Health, the National Institute of Environmental Health Sciences, the World Health Organisation and the University of Michigan.

Researchers involved in the women’s health project said the scale and breadth Apple could bring to the field was unprecedented. The iPhone maker is targeting one million sign-ups over 10 years. – Copyright The Financial Times Limited 2019