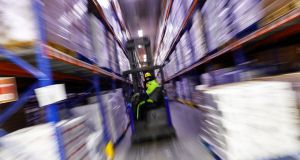 Glanbia is not along in stockpiling goods in warehouses in Britain: no-deal Brexit fears have led to huge growth in demand for capacity in the sector, according to the UK Warehousing Association. Photograph: Bloomberg

Irish-listed food group Glanbia is stockpiling products in Britain as a contingency measure against a no-deal Brexit, Glanbia chief executive Siobhán Talbot told Ciarán Hancock this week. Ms Talbot, who said Glanbia is not immune from the impact of Brexit, was interviewed in this week’s Inside Business podcast. You can listen to the full, exclusive, interview here.

As Joe Brennan mixes with the great and the good in Davos, his diary from yesterday features Prince William, Jacinda Ardern and Angela Merkel, while he also reports on what Bono had to say about the morality of capitalism. He’ll continue his Davos reports on irishtimes.com/business today, with Leo Varadkar due to participate in a panel in between pressing his Brexit case with key influencers. Perhaps unfortunately, European Commission president Jean-Claude Juncker has been forced to cancel his participation in the forum due to a bout of stomach flu.

Nama is due to wind itself down by 2021 at the latest, but it is likely that some of its business will still be unresolved at this stage, writes Ciarán Hancock. The Government is giving “active consideration” to the issue, according to written answers to questions from Sinn Féin’s finance spokesman Pearse Doherty.

Karlin Lillington this week reflects on “tech generation gaps”, specifically technology-related things that make no sense to anybody below 30. Remember “the oingy-boingy sound of a a dial-up modem connecting to the internet”, or the joy of storing the entire operating system of your computer on a single floppy disc?

Ciara O’Brien casts an eye over the growing market for technology products developed specifically for women, with most of these focusing on female health. Crunching data to help women to predict the timing of menstruation or ovulation is big business at this stage, with the market now expanding to cover more general aspects of female wellbeing.

In Innovation, Jonah Engel Bromwich looks at the weird and potentially worrying trend of hurting robots, whereby some humans seem compelled to behave aggressively when they come across humanoid robotic creations.

Olive Keogh speaks to Phil Smith, the entrepreneur behind vegan food company, Shoots and Roots. Smith explains that he started the business from his mother-in-law’s kitchen table, having since grown into supplying Avoca and SuperValu.

In his Innovation Works column, John Holden looks at the business case behind Donald Trump’s plans for a border wall with Mexico, recognising that the “mother of all” construction projects would by definition provide a huge economic boost, regardless of the ethical aspects of the endeavour.

David McNeill examines the latest setback for Japan’s nuclear export industry, which has been taking a battering since the 2011 Fukushima nuclear accident. He asks if the time has come to admit the once buoyant business is officially dying.

1 ‘No demand... because there are no people’ at well-known Dublin pub
2 HSE says fix for Covid Tracker app has been rolled out to all Android users
3 Nearly 30,000 could lose pandemic payment if they do not confirm eligibility
4 Buying a second home now that we work from home
5 Face masks developed in Ireland could help meat-plant workers
6 Shelbourne Hotel operator Marriott posts bigger-than-expected loss
7 Bank of Ireland does U-turn after refusal to reimburse ‘smishing’ victims
8 Survey finds ‘huge appetite’ for remote working
9 McDonald’s sues former CEO over alleged sexual relationships with employees
10 Unilever would scrap HQ move if Dutch ‘exit tax’ law enacted
Real news has value SUBSCRIBE