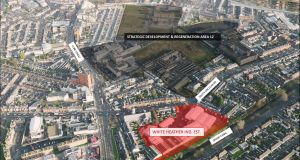 The White Heather site is located near the Liberties.

UK property group U+I may seek to get an industrial site it bought in Dublin last month rezoned for residential use under the city’s next development plan, which comes into effect in 2022.

In December, U+I announced it had acquired the White Heather industrial estate on the South Circular Road in Dublin 8.

The developer said that rezoning the 2.84-acre site for residential use would “support demand for more homes in this underutilised location”.

U+I is unlikely to start developing immediately given that the nearest break options on the leases at the site are just more than five years away.

The industrial estate, near the Liberties and minutes away from St James’s Hospital and the new National Children’s Hospital, currently produces annual income of €555,000 and has five tenants, including An Post, which operates a sorting office there.

U+I chief executive Matthew Weiner said it had been a “busy few months” for the company. “We continue to focus on high-quality trading schemes that support short-term profits in our core London city region, Manchester and Dublin,” he said.

U+I has a €10.6 billion portfolio and has been steadily expanding its Dublin presence since 2012. Among its major completions thus far is the letting of the Vertium Building to Amazon and the mixed-use Percy Place development on Haddington Road.