Dublin bucks trend amid day of jitters for Europe’s banks 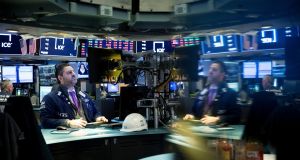 A trader works on the floor of the New York Stock Exchange on January 22nd. Photograph: Michael Nagle/Bloomberg

European shares extended their slide on Tuesday, as growth worries weighed on global markets and results from Switzerland’s UBS dragged on the banking sector. The Iseq in Dublin bucked the trend, however, finishing ahead by more than 0.3 per cent after resilient performances from its heavy-hitters.

Despite recently issuing a profit warning, Ryanair was up more than 3.9 per cent to €10.86 per share, on the back of a positive trading statement from its rival easyJet, which said 2019 bookings were looking good.

Irish Ferries owner Irish Continental Group dropped by more than 0.5 per cent to €4.90, despite announcing it had secured €155 million from the European Investment Bank to finance two new ships.

Poor results from UBS caused waves throughout the European banking sector, with mixed results for the Irish institutions. AIB fell 0.9 per cent to €3.96, despite clawing back some ground late in the session. Bank of Ireland, meanwhile, rose almost 0.6 per cent to €5.54. It spent most of the day in the red but was back in positive territory by late afternoon.

The FTSE 100 posted its worst day in nearly a month as the renewed global economic slowdown worries sparked a sell-off. The blue-chip bourse fell 1 per cent and the FTSE 250 closed down 0.4 per cent.

The generally sour mood weighed on crude and metal prices, with oil and miners the worst FTSE 100 performers, down 2.6 and 1.9 per cent respectively. BHP’s weak outlook for iron ore output pushed its shares down 2 per cent. Shell slipped 2.5 per cent and was the main drag on the FTSE 100, after Morgan Stanley downgraded it.

Banks fell 1 per cent as weak results from UBS deepened concerns about the pain across the sector from low interest rates and rising political uncertainty.

However, easyJet climbed 6.3 per cent, its best day in more than four years, as investors cheered the budget airline maintaining its full-year outlook even after counting the cost of the drone disruption at Gatwick Airport in December.

Ocado rose 3.3 per cent while Sainsbury’s, which is looking to buy Walmart’s Asda in a £7.3 billion deal, added 1.4 per cent after analysts at Jefferies said Walmart’s exit from the UK would have positive implications for grocers.

The pan-European STOXX 600 fell 0.4 per cent, with Germany’s DAX also retreating 0.4 per cent and Italy’s FTSE MIB down 1 per cent as a new batch of corporate updates cemented the risk-averse mood.

Shares in UBS dropped 3.2 per cent after the bank’s fourth-quarter earnings sent jitters across a sector struggling to recover after losing almost 30 per cent of its value in 2018. Europe’s banking index fell 1 per cent, with HSBC, BNP Paribas and Santander down between 1.2 per cent and 2.7 per cent.

In Milan, Telecom Italia tumbled 6.2 per cent as uncertainty over its strategic options grew after a regulator pushed back a plan to separate its fixed-line network.

Puncturing the gloom was German fashion house Hugo Boss, which jumped 5.2 per cent after it predicted more expansion this year after a pick-up in sales growth at the end of 2018.

Johnson & Johnson fell 1.7 per cent after the healthcare giant forecast weak 2019 sales, pushing the healthcare sector 0.87 per cent lower. The Nasdaq Biotech Index dropped 1.72 per cent. All the 11 major S&P 500 sectors were lower and five of them, including industrial and technology, slipped more than 1 per cent.

Halliburton shares fell 5.4 per cent after the oilfield services company forecast lower revenue in key business areas in the first quarter, overshadowing a quarterly profit beat. Arconic fell 17 per cent, the most on the S&P 500, after the aluminium products maker said it was no longer pursuing a sale.

EBay jumped 7.2 per cent, the most on the S&P 500, after hedge funds Elliott Management and Starboard Value urged the ecommerce platform to sell certain assets and restructure.

1 Should my mam wait for house prices to drop before buying?
2 Cheers: Conor McGregor's whiskey races up the sales chart
3 Two prominent business leaders in planning row with neighbour
4 ‘I’m so lucky to be in the Caribbean – a million miles from Derry Girls’
5 Coronavirus: Big majority ‘uncomfortable’ returning to everyday activities
6 Global stocks climb near three-month highs as rebound hopes grow
7 ‘I have a talent for justifying purchases’
8 Chris Johns: Past is another country when it comes to our post-pandemic future
9 Battle for control of America’s mammoth utility industry set to intensify
10 McCanns’ Balmoral sees property value hit from Covid-19
Real news has value SUBSCRIBE