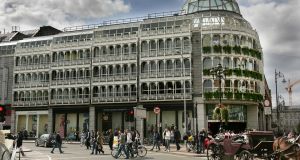 TheCentral Bank will, for the first time, be able to fine and disqualify senior bankers for failings under their watch without first proving wrongdoing by their employers under new laws being drawn up in the wake of the tracker-mortgage scandal, reports Joe Brennan.

In property, overseas investors now see the prime Irish office sector – which is currently valued at a rental yield of about 4 per cent – as “fully priced”, offering little or no upside, members of new lobby group, Irish Institutional Property said. But, they tell Joe, a crash is not likely.

US president Donald Trump was getting himself worked up over signals form the European Central Bank that it remained open to quantitative easing, if necessary, accusing the ECB president of unfairly manipulating the euro. Draghi’s comments pushed up bond prices and saw the euro weaken.

At the Paris Air Show, lessor Avolon signed a deal for 140 engines valued at $2 billion to power its burgeoning Airbus A320 neo fleet, writes Peter Hamilton. Separately, Aer Lingus owner IAG ordered six Airbus A321 XLRs to allow the Irish airline launch new routes beyond the US east coast and Canada. It also signed a letter of intent with Boeing for 200 B737 aircraft for its Vueling, Level and British Airways operations.

As Heathrow unveiled its £30 billion expansion masterplan, including a new runway, Boris Johnson, the man who once declared he would “lie down…in front of the bulldozers” to prevent its construction was otherwise engaged in his pursuit of the Conservative party leadership, writes Fiona Walsh in her London Briefing.

In Commercial Property, Ronald Quinlan reports that two separate shareholders are putting a combined 62.4 per cent stake in Dublin’s St Stephen’s Green Shopping Centre on the market quietly with a guide price of €130 million.

And developer Michael O’Flynn has hit out at those in the property industry whom he says are “now cheerleading” for a shift in government policy that prioritises the private rented sector model over traditional home ownership.

Still with property, investor Starwood is reported to be preparing to sell a €530 million portfolio of offices in Dublin in what would be one of Ireland’s biggest property sales.

Elsewhere, Ciara O’Brien takes you through what Facebook’s plans for a cryptocurrency launch in 2020 really mean with a Q&A.

And Denis O’Brien and Rupert Murdoch are united in attacking what they say is the “heavy-handed” manner in which broadcasting is regulated in Ireland, especially given the absence of market restrictions for online giants Google and Facebook. Laura Slattery reports.

And finally, in her column, Fiona Reddan assesses whether new rules regulating Airbnb properties in Ireland have any chance of succeeding. Find out why she’s not very confident.