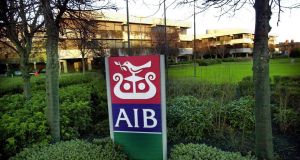 Women account for almost four out of every 10 managers at AIB, bringing it close to a key target, a report the bank released shows.

The bank has published its second sustainability report, showing how it is measuring up to standards set for dealing with customers, the State and staff.

According to the report, 38.7 per cent of all the bank’s managers are women, indicating that it will reach its target of 40 per cent by the year’s end.

“We have taken a lot of initiatives on hiring women and on promoting women, such as making working as flexible as possible,” a spokesman explained at the weekend.

Those measures included four-day working weeks and being flexible about where staff actually work. For example, someone based in the lender’s HQ in Ballsbridge on Dublin’s southside, can also work from other offices, such as a large one it has in Swords on the other side of the capital.

By “manager”, the bank means someone responsible for running teams of people.

AIB set the 40 per cent target in consultation with organisations that want to promote gender equality in financial services. It is understood that the bank regards it as a starting point, and that once it is reached, the lender could set further goals.

AIB used the proceeds of its initial public offering to repay €10.5 billion of the €20.8 billion it received from the State to bail it out following the financial crisis. It still aims to repay the full amount.

The bank has also brought the number of loans in arrears on its books down to 16 per cent, in line with European norms.

Last year, the Financial Services and Pensions Ombudsman (FPSO) upheld just one complaint against AIB, down from 10 in 2016. The report says the bank has taken a new approach to handling complaints made to that office.

Previously, AIB relied on its terms and conditions as a defence – once the bank remained within those, it held its position.

“In investigating each complaint that has travelled as far as the [ombudsman], we [now] try to find a better balance between our legal obligations and what is fair and reasonable for the customer,” the report says.

AIB overhauled its complaints procedure over the last two years. The bank now refers more complex issues to a central customer care office in Limerick, cutting the average number of days needed to resolve these problems to 12 from 27.

At the same time, it ensures that, at all its branches and other points of contact with customers, staff have the means to resolve complaints when somebody first makes them.

AIB found a further 500 customers hit by the tracker-mortgage scandal during June. It will compensate and redress these people during August and September.

In all, the bank wrongly moved more than 11,700 customers from cheap tracker mortgages to more expensive home loans. Its review, supervised by the regulator, the Central Bank, is ongoing.

“The review will not be complete until the Central Bank determines it to be so,” the report says. “However, we believe we have identified the significant majority of customers likely to be deemed impacted by the review.”

It is understood that AIB does not expect to discover large numbers of further customers hit by the tracker mortgage row.