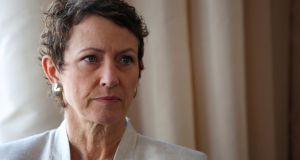 Ms Beale’s departure from the centuries-old insurance market comes amid concerns that, despite a modernisation drive, it is losing ground to rival centres such as Singapore and failing to stem losses.

The exact date of her departure has not yet been set but the search for her successor is already under way, Lloyd’s said in a statement, following an earlier report in the Insurance Insider.

“Leading Lloyd’s is an honour and I am proud to have played a part in ensuring that it remains relevant and fit for purpose for the future,” Ms Beale said in the statement.

Lloyd’s of London, which started life in Edward Lloyd’s coffee house in 1688, focuses on specialised insurance risks, from oil rigs to footballers’ legs.

Ms Beale was appointed chief executive in January 2014 and has led a push for a more diverse workforce in the market, which is made up of more than 80 insurance syndicates.

Lloyd’s is reviewing costs after a series of natural catastrophes drove it to a £2 billion (€2.25 billion) loss last year, and is asking syndicates to provide action plans for their least profitable areas of business. – Reuters

1 NI house builder apologises to Harry and Meghan over adverts
2 Little strategic thinking in election manifestos of Fine Gael and Fianna Fáil
3 Volvo warns of scaled back car line-up if UK splits from EU rules
4 Are there annual limits on inheritances or gifts to a child?
5 Opioid executive admits to ‘no morals’ ahead of prison term
6 US threatens retaliation against EU over proposed carbon tax
7 Who are Ireland’s 17 billionaires?
8 RTÉ’s multiple lobbying meetings with politicians
9 Help, I’ve no PRSI stamps – can I still get a pension?
10 ‘We get on with things despite the politicians’
Real news has value SUBSCRIBE