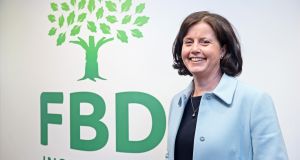 FBD said in a statement on Friday that it is investigating internal allegations against chief executive Fiona Muldoon. Photograph: Eric Luke

The head of Ireland’s only listed insurer is facing an internal investigation.

Insurer FBD said in a statement on Friday that it is investigating internal allegations against chief executive Fiona Muldoon.

FBD Holdings indicated that it had received an enquiry regarding internal allegations against Ms Muldoon.

“An investigation relating to this matter is ongoing,” the company said. “The investigation is being conducted with due regard to the rights of all the parties involved.”

The insurer added that Ms Muldoon remained in her position as chief executive of FBD.

The company refused to comment any further and would not reveal the nature of the allegations against the chief executive.

Ms Muldoon earned plaudits earlier this year when FBD paid its first dividend to shareholders since 2014.

She took over the insurer in late 2015, when the business was at a low ebb and had reported a hefty underwriting loss of €125 million for that year.

Ms Muldoon streamlined the business and replaced virtually its entire executive team. She also renewed FBD’s focus on the prices it charged and the risks it took on.

In February, FBD announced profits before tax of €49.7 million for 2017, a significant increase on the €11.4 million it reported the previous year.

Ms Muldoon joined the company from the Central Bank where she had been head of banking supervision since 2011. While in that role, she took the banks to task for failing to tackle the problem of mortgage arrears.

Before her stint as a regulator, she spent 18 years with global insurance group XL, including seven years in Bermuda.

1 Fianna Fáil may have just pressed the pause button on the property market
2 Who are Ireland’s 17 billionaires?
3 Saudi prince’s WhatsApp account ‘directly involved’ in Bezos hack
4 Corporate tax change is inevitable, says Donohoe
5 Irish organisations struggle to comply fully with GDPR
6 European investor acquires Harcourt Road offices for €55m
7 New blow for Ted Baker as accounting scandal doubles in size
8 Are there annual limits on inheritances or gifts to a child?
9 My father in a nursing home wants to gift me his house
10 O’Flynn company ‘mistakenly’ got go-ahead for Birmingham project
Real news has value SUBSCRIBE