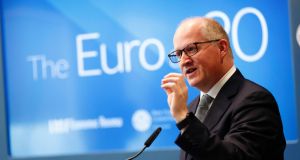 Philip Lane, governor of the Central Bank of Ireland at “The Euro at 20” conference hosted by the bank in Dublin. Photograph: Conor McCabe Photography.

The mooted introduction of a counter-cyclical capital buffer (CCB) by the Central Bank could have “adverse implications” for the cost and supply of credit in Ireland.

Combined with the regulator’s macro-prudential rules, it could make it more difficult and expensive for homebuyers and borrowers to get access to finance, stockbrokers Davy allege.

The increase in the minimum amount of capital banks hold, as a hedge against a future recession, was first suggested by Central Bank deputy governor Sharon Donnery back in May. She said the case for the increase of the buffer was “compelling” to “effectively promote resilience in the financial system”.

Central banks and regulators across the EU have been obliged since 2016 to make lenders ringfence funds when they judge that credit growth is becoming excessive. The CCB is usually set at between 0-2.5 percentage points. In Ireland, where lending is still below normalised levels, the buffer is currently set at zero and will next be reviewed over the coming 10 days.

In a new report, Davy Stockbrokers said introducing such a buffer could indicate that the Central Bank envisages that a higher CCB would be appropriate in time.

“This may apply upward pressure to management capital targets, which would in turn have implications for both the cost and supply of credit to the economy,” Davy said.

The report came as Central bank governor Philip Lane said that Ireland’s debt crisis could have been worse if it and other debt-ridden euro zone states had been allowed revert to their original currency and effectively devalue at the height of the financial crisis.

In a paper delivered to the “Euro at 20” conference hosted by the Bank in Dublin, Prof Lane said while devaluation – a course of action that many argued for at the time – may help stimulate economic recovery by improving domestic cost competitiveness, “its immediate impact is to further exacerbate balance sheet problems in relation to foreign-currency debts”.

“Taken together, these forces could have led to a more acute type of crisis, with a deeper initial recession, larger movements in interest rates and asset prices, a jump in the domestic price level and more debt restructuring,” he said.

In his paper, which looked at the lessons learnt from the crash, he noted that while Ireland achieved small headline budget surpluses during the boom , the underlying budget balance was much less healthy, given the reliance on construction-intensive tax revenues.