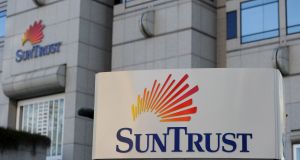 US regional lender BB&T will buy rival SunTrust Banks for about $28 billion in stock, unveiling the biggest bank deal since the 2007-09 financial crisis and a potential first step in a long-awaited wave of consolidation in the sector.

Its footprint will cover the east coast, with new corporate headquarters to be situated in Charlotte, North Carolina. The combined company will retain operations in Winston-Salem, North Carolina, and Atlanta, Georgia, the home markets for both companies.

The deal comes as the Trump administration is easing crisis-era regulations, which restricted expansion and added increased regulatory scrutiny on big banks.

Deal activity in the sector languished after the financial crisis a decade ago as stricter rules were imposed on lenders with more than $50 billion in assets and regulators barred banks with compliance issues from expanding.

Changes in US tax laws have lowered corporate taxes, freeing up capital, and Wall Street has long been expecting a wave of dealmaking in the banking sector.

“The BB&T/SunTrust merger will open more eyes on the potential for more sizeable bank M&A to occur,” Jefferies analyst Ken Usdin wrote in a client note.

As part of the deal, SunTrust shareholders will receive 1.295 shares of BB&T for each share they own. The per share deal value of $62.85 is at a 7 per cent premium to SunTrust’s closing price on Wednesday, according to a Reuters calculation.

Shares of Atlanta-based SunTrust jumped 10 per cent to $64.60 before the opening bell, above the acquisition price, while those of BB&T rose 5 per cent to $51.20.

BB&T shareholders will own 57 per cent of the combined company and SunTrust will own the rest.

Analyst Stephen Scouten of brokerage Sandler O’Neill said he expected the deal to get regulatory approval. “These are both very clean banks. So ultimately, [it] should get done.” – Reuters