Was it worth paying €41.7bn to bail out Irish banks? 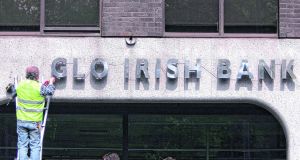 Lest we forget, the Comptroller and Auditor General this week reminded us that the bill for bailing out our domestic banks continues to rise. To the tune of more than €3 million a week, actually.

In its annual report on the public services, the C&AG included a chapter on the cost of the so-called bank-stabilisation measures taken over the past decade. That refers to bailout funds provided by taxpayers post the 2008 crash.

The total cost of these bailouts – which started in 2009 and covered AIB, Anglo Irish Bank, Bank of Ireland, EBS (now part of AIB), Irish Life & Permanent (since separated into Irish Life and Permanent TSB) and Irish Nationwide Building Society – amounted to €64 billion.

By the end of last year, the net cost stood at €41.7 billion, when disposals of equity and shares are taken into account, along with dividend payments, and a range of fees paid to the State.

The cost of servicing the debt amounts to between €1.1 billion and €1.3 billion a year. Even in this low interest rate environment. The C&AG puts it at €420 million for each percentage point that the State pays on its debt.

IBRC – the rump of the old Anglo Irish Bank and Irish Nationwide Building Society – continues to cost us €800 million a year in debt-servicing costs. And it was wound up in 2013, although the liquidation process continues to run as KPMG’s Kieran Wallace and Eamonn Richardson tie up various loose ends and litigation.

For AIB, the annual cost on the debt is just under €400 million. The cost of servicing Permanent TSB’s funding is €50 million, which is nearly 17 times the lender’s pre-tax profit for last year. A high price to pay for rescuing a tiddler bank.

Gone up in smoke

It gets worse. The estimated net cost for IBRC’s bailout amounts to €36.4 billion, money that has gone up in smoke. This excludes €225 million handed over by the special liquidators in February. There might be more payments to come but it won’t move the dial substantially.

For AIB, the net cost to taxpayers was estimated at €9.5 billion. The State still owns 71 per cent of AIB and the bank has insisted at various times over recent years that it will repay its bailout money in full. But that’s not the C&AG’s view.

“It is unlikely that the State will generate a surplus on its investment of €22.2 billion in AIB. At the end of 2018, this investment has cost the State an estimated €9.5 billion, after taking account of the €7.1 billion value of its remaining shareholding in AIB [a valuation that has since fallen to €5.1 billion].

“Projected outcomes that the State might recover the full investment do not appear to take account of the cost of servicing the debt associated with the investment – €6.2 billion by the end of 2018.”

Bank of Ireland is best in class, having repaid the State in full with the possibility that taxpayers might eventually see a profit of €1.3 billion on the investment – we still own 14 per cent of the lender.

The final cost of the bank bailouts has still to be determined and there are a number of factors at play. Nama is projecting to return a surplus of €4 billion to the exchequer but that could go either way and we still don’t have a firm and fast date for its winding up.

The sale of our remaining shares in AIB and PTSB could yield a higher-than-expected figure, or a lower one, and we might be able to trim the debt-servicing costs given the low interest rate environment that prevails.

Was it worth it?

There are differing views on that question. We could have built a lot of hospitals, schools and roads with €41.7 billion.

But we needed a functioning banking system. Rescuing AIB/EBS, Bank of Ireland, and Permanent TSB was painful but necessary given the climate of the day and the needs of depositors, savers, mortgage holders and staff.

However, extending the State banking guarantee to Anglo and Irish Nationwide in September 2008 was folly.

The C&AG’s report didn’t include the costs of the tracker mortgage scandal. By dint of our stakes in AIB, Bank of Ireland and PTSB, taxpayers are picking up a sizeable chunk of the €1 billion-plus in costs associated with providing redress and compensation for the 40,100 customers impacted by being denied a tracker for one reason or another.

Mr Justice John Hedigan, chairman of the new Irish Banking Culture Board, an industry initiative, told an Oireachtas committee yesterday that he remains sceptical but optimistic that the State’s banks are committed to improving how they treat customers. Join the club.

8 Covid to hit housing, pay to remain flat and a very Irish hybrid