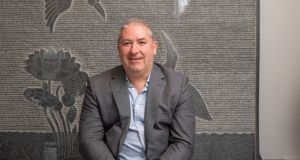 Founded in 2008 by Noel Moran, PFS is one of Europe’s largest issuers of e-money and is now active across 25 countries

The company, one of Ireland’s largest issuers of payment cards, said on Monday it would also hire an additional 50 staff as it moves its Irish base from Navan to Trim. That follows a hiring spree that took place earlier this year when it also filled 50 jobs.

Founded in 2008 by Noel Moran, PFS is one of Europe’s largest issuers of e-money and is now active across 25 countries. Aside from its Irish base, where it employs more than 140 staff, the company has offices in Malta, London and Manchester.

The company is investing €50 million in its Trim base as it gears up for continued expansion, according to Mr Moran, the chief executive of PFS.

“This is a terrific jobs boost for the area and we will also make a significant investment of around €50 million into a new sleek, modern fintech hub which, when fully developed, will create up to 750 office spaces,” he said.

“As a Meath man, I am proud to be creating more new jobs in the region and we hope we can fill a lot of these roles at the upcoming Meath careers expo.”

In April, PFS was granted an e-money licence by the Central Bank of Ireland, adding to its regulation by the Financial Conduct Authority in the UK.

Among the company’s payment solutions are e-wallets, physical and virtual prepaid cards and IBAN accounts in the UK and euro zone. Its clients include governments, local authorities, NGOs, mobile network operators and banks.

The most recent set of accounts for Prepaid Financial Services (Ireland) Ltd show the company made a £7.2 million (€8.11 million) profit last year on sales of £64.75 million. That compares to a £3.7 million profit the previous year on revenues of £45 million. Mr Moran controls 65 per cent of the company.