Bankers must prove culture has changed before pay cap goes

Report by consultants recommending changes given to Minister a month ago 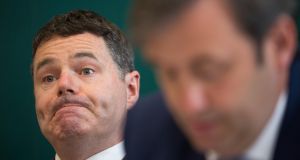 He might not have been articulating official Government policy but comments this week on bankers’ pay from the Minister of State with responsibility for financial services, Michael D’Arcy, gave a clear signal of the current mood in Leinster House around this toxic issue.

“The senior executives are on very large salaries and, as long as the State owns [them], I’m satisfied the pay caps are appropriate,” D’Arcy told the Financial Times in an interview in New York, describing bankers’ pay as “the very, very top percentile of salaries in Ireland”.

There is little public sympathy for the plight of bankers and D’Arcy is in politics long enough to know that there are no votes to be won by loosening the pay restrictions on the sector.

AIB, Bank of Ireland and Permanent TSB have been subject to a salary cap of €500,000 for the guts of a decade, while an 89 per cent tax rate on bonuses effectively rules out incentive payments.

The banks have been lobbying for changes to the rules for some time, citing difficulties in retaining talent in the face of competition from international banks operating here, who aren’t subject to the caps.

Competition for talent has heated up over the past two years as various financial institutions have moved operations here because of Brexit.

AIB would cite the departures of former chief executive Bernard Byrne to Davy and former finance chief Mark Bourke to Portugal’s Novo Banco as examples of members of its senior leadership team moving on because of the pay restrictions.

In the wake of Andrew Keating’s recent defection to CRH, Bank of Ireland said the “current restrictions represent a clear competitive disadvantage, and hamper our ability to attract and retain the people we need to run and develop our business”.

Keating’s total remuneration (including a car allowance and a pension payment) in 2018 was €531,000 and the bank could have awarded him another €32,000 in salary.

Interestingly, Bank of Ireland’s chief executive, Francesca McDonagh, earns a salary of €950,000, almost twice the Government’s cap. That’s a legacy of her predecessor Richie Boucher being allowed to stay outside the restrictions when they were introduced.

And the salary cap clearly hasn’t been an issue for PTSB where its chief executive, Jeremy Masding, is paid €466,000, some €34,000 below the Government’s restriction. He also got an additional €78,000 in pension contributions, benefit in kind and taxable expenses.

The big bugbear for the banks appears to be the punitive tax on bonuses. AIB sought to introduce an incentive scheme for executives last year, tied to the full repayment of its bailout money, but it was shot down by Minister for Finance Paschal Donohoe, who sensed a political storm brewing.

Consultants Korn Ferry were later appointed to conduct a review for Donohoe, to help him navigate his way through this political minefield. And kick the can down the road.

He has had the report on his desk for about a month but has yet to bring any recommendations to Cabinet, with nothing likely to happen on that front until September at the earliest.

It is understood that Korn Ferry has recommended some changes, although the details of the report have not been revealed. With talk of a general election in the air, Donohoe can hardly be relishing seeking the support of colleagues in the minority Government for a loosening of the rules.

The proximity of the tracker-mortgage scandal is also a big problem for the banks. In its final report on the tracker issue last week, the Central Bank found that 40,100 mortgage accounts had been impacted, with the banks paying €683 million in redress and compensation to date. Some 99 families lost their homes as a result of the tracker issue, a scandal that took place following the crash. The scale of the issue was breathtaking, and it took a long time for the banks to accept the scale of the problem.

In an interview with me earlier this month, Brian Hayes, the former Fine Gael politician who is now chief executive of the Banking & Payments Federation Ireland, accepted that the tracker-mortgage scandal needs to be dealt with in full before the pay restrictions could be unwound.

This view chimes somewhat with the stance of Fianna Fáil. In a statement, it’s finance spokesman, Michael McGrath, said: “Until the tracker-mortgage scandal is fully dealt with and bankers can be held to account through new legislative powers, I believe it would not be appropriate to loosen the restrictions on bankers’ pay and bonuses.”

Let’s not forget that the Government relies on Fianna Fáil’s support to get legislation through the Dáil.

PTSB has already been fined a record €21 million for its tracker failings and enforcement actions are under way against the other lenders here. So there’s still a distance to be travelled before a line can be drawn under this sorry saga.

McGrath also wants the senior executive accountability regime to be introduced under the Central Bank (Amendment) Bill 2019 before the restrictions can be lifted. This would give the regulator the ability to fine, reprimand or disqualify top bankers for any failings.

There’s also the small matter of the billions still owed to taxpayers by AIB and PTSB. Taxpayers would prefer to get all their money back first before allowing bankers to pay themselves bonuses again.

Time moves on and changes to the current rules on pay will eventually be agreed. Before that happens, at a minimum, banks should be required to provide clear evidence that they have changed their culture and are actually putting their customers first. Which probably means it’s years off.