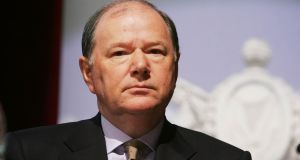 The chairman of the new Irish Banking Culture Board has said he remains sceptical, but optimistic, that the State’s banks are committed to improving how they treat customers after a decade in which the industry has been engulfed by the financial crisis and the tracker-mortgage scandal

Mr Justice John hedigan said the only way banks can regain trust “is to earn it”.

“We will call out poor conduct when we find it,” the former Court of Appeals judge told members of the Oireachtas finance committee on Tuesday. “I accept the scepticism that exists in relation to this endeavour. I am also a sceptic. It would be difficult to spend 42 years in the practice of the law without developing a healthy degree of scepticism.”

The five retail banks in the Republic set out in late 2017 to establish the Irish Banking Culture Board (IBCB) in the wake of the tracker-mortgage scandal, as they faced the prospect of politicians and regulators taking action to address culture issues in the banks. The 14-member board was officially set up in April. It comprises five senior bankers and seven non-banking members, including consumer advocates, business representatives and academics.

“I’m sufficiently cynical myself about the rationale as to why it came into existence,” he said. “But here we are. The banks had to create something and we’re it. I’ve some considerable hope.”

Mr Justice Hedigan said he got involved personally when he learned over the summer that banks were contesting the Financial Services Ombudsman attempts to investigate tracker-case complaints, claiming they fell outside a legal six-year time limit. The IBCB’s five member banks committed in late August to waive this time limit.

The results of an industry-wide survey, carried out by the board before its April establishment, underscored the challenge ahead. It found that over a third of staff in the sector wanted to raise a concern over the previous 12 months, mainly relating to their company not acting in the best interests of customers.

However, more than two in five respondents of these failed to speak up, fearing that it would either be held against them or that nothing would come of it.

Acting IBCB chief executive Marion Kelly said the board had been focusing on three areas to date:

– how banks can make it easier for staff to speak up and challenge authority;

– how services for bereaved customers can be improved, and;

– financial awareness and education for the general public.

The board, which will shortly start a search for a permanent CEO, will later this week begin looking at how banks work with vulnerable customers.

Committee member Michael McGrath TD, Fianna Fáil’s spokesman on finance, asked the IBCB to look also at how banks deal with customers involved in a relationship breakdown. He highlighted cases where one party to a breakdown may wish to take on the entire mortgage for the family home but that banks insist that they need to take out a fresh mortgage.

“Very often it’s the family home, with children involved, which can be very difficult,” he said.

“They’re a heartless bunch,” he said. “I don’t know how you are going to release them from that sort of make-up.”

1 Chris Johns: Boohoo exposed on pay and conditions in digital economy
2 Hotel bookings collapse in wake of additional Covid restrictions
3 In this strangest of recessions, what happens next for Ireland?
4 Estée Lauder staff at Dublin airport plan further strike action
5 Michael O’Leary is the boss you want to lead an airline out of crisis
6 Best Covid-19 ‘influencers’ will avoid hectoring
7 Should I switch bank now with Ulster Bank at risk of closing?
8 Dunnes Stores set to enter grocery delivery market
9 FBD changes wording of insurance policies as fight over virus payouts plays out
10 Nokia timeline
Real news has value SUBSCRIBE