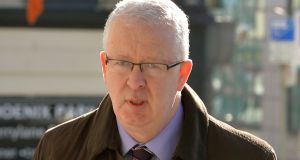 Con Horan resisted appearing before the INBS inquiry as he is now resident in the UK, the inquiry heard. File photograph: David Sleator

A former senior Irish financial regulator, Con Horan, failed to appear as scheduled on Monday at an ongoing inquiry into the now-defunct Irish Nationwide Building Society (INBS) as he is on holidays.

The inquiry’s three-member panel will consider over the coming days what steps to take, according to chairwoman Marian Stanley. The inquiry was informed of a series of correspondence in which Mr Horan, through his solicitor, had resisted appearing before the inquiry, as he is now resident in the UK as an employee of the European Banking Authority.

“It is extraordinary that he has chosen not to [appear before the inquiry] because he is on a holiday today,” said Brian O’Moore, of the team of legal practitioners assisting the inquiry into alleged regulatory breaches at INBS. “The position, when looked at in the round, is an utterly unsatisfactory one.”

The panel heard that Mr Horan’s solicitor informed the Central Bank’s regulatory decisions unit (RDU), which is providing administrative support to the inquiry, last October that the potential witness was not amenable to a subpoena from a different jurisdiction to give evidence in Dublin.

He said that the outcome of Mr Horan’s previous extensive co-operation with previous inquiries surrounding the banking crisis and legal cases had been a “negative” experience.

Officials attempted to serve a summons on Mr Horan at his last known address in Dublin on December 16th, 2017, when two teenagers who answered the door said he was a resident of the address but not present, the inquiry heard.

On a follow-up attempt on December 28th, the person seeking to deliver the summons left the letters in the post box at the address after he received no answer at the door and a neighbour confirmed that Mr Horan was a resident of the house.

Mr O’Moore said subsequent correspondence from Mr Horan’s solicitor confirmed that he had received the summons and reiterated that the former regulatory official resides in the UK with his wife.

A promise by the solicitor in February to provide evidence of how Mr Horan does not reside at the Dublin address has not yet been fulfilled, according to Mr O’Moore.

Mr Horan’s solicitor gave the first indication on May 4th that the former official would be willing to appear before the inquiry in July. However, as the RDU informed him that it was envisaged that the current phase of the inquiry – into the workings of INBS’s credit committee before the financial crash - would be completed by the end of May, the solicitor suggested May 30th and May 31st, which didn’t work for the inquiry.

The RDU had not received a response from the solicitor before public hearings resumed on Monday on whether Mr Horan could appear on suggested dates of May 23rd and May 24th.

“There seems to be just a defiance of the inquiry by Mr Horan,” said Mr O’Moore, adding that the panel would have to consider what steps to take.

Ms Shanley said the panel has decided to defer a decision on the next move until Tuesday or Wednesday, as the inquiry sought to engage with Mr Horan’s solicitor.

The inquiry is into whether four former INBS executives participated in the commissioning of seven regulatory breaches between August 2004 and September 2008. Public hearings began last December.