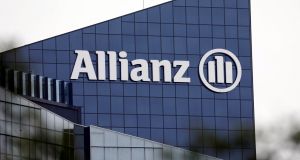 The logo of insurer Allianz SE is seen on the company building in Puteaux at the financial and business district of La Defense near Paris, outside Paris. Photograph: Charles Platiau/Reuters

Income from property and casualty premiums rose as customers opt for more coverage after last year’s US hurricanes and California wildfires contributed to a record year for insurance losses. That helped boost net income attributable to shareholders to €1.9 billion compared with €1.8 billion a year earlier.

“We had increases in both the top and the bottom lines, even if market volatility was visible at an operating level in the first quarter,” chief executive c Oliver Baete said in a statement on Tuesday. “This good performance puts Allianz on track to meet its 2018 yearly targets.”

Allianz, led since May 2015 by Oliver Baete, had told investors it will pay out the company’s unused acquisition budget if it can’t find suitable deals. In an interview with the Financial Times earlier this month, the CEO said that he would be interested in merging Allianz with a big competitor. Allianz had been interested in acquiring property and casualty insurer XL Group earlier this year, Bloomberg News reported in March, before Axa SA agreed to acquire the Bermuda-based firm.

Gross premiums written in property and casualty rose 1.1 per cent from a year earlier to €17.9 billion. The firm had earlier said it expects to make an additional €300 million profit this year from tax reform in the US.

The asset management unit had third-party net inflows of €20.9 billion, with €19.2 billion of that coming from Pimco. Overall, third-party assets under management fell 1.3 per cent to €1.43 billion at the end of December, mainly due to foreign exchange changes. Adjusted for foreign exchange effects, operating profit at the unit increased by a “remarkable” 16.3 per cent and cost-income ratio improved by 1.4 percentage points to 61.9 per cent.– Bloomberg