IFG needs to give shareholders more clarity on ‘long-term strategy’

Company has, of late, not inspired confidence as it seems to hobble from one crisis to next 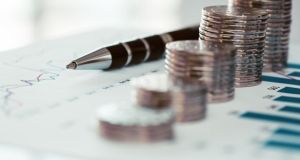 At its annual general meeting in Dublin on Wednesday, financial services firm IFG presented its annual report with the sanguine title: “Long-term strategy for success.”

As it struggles to move on from the botched sale process of one of its divisions – Saunderson House – and deal with legacy issues, IFG needs to give shareholders a lot more clarity on this “long-term strategy”.

The Dublin-based but UK-focused financial services company has, of late, failed to inspire confidence as it apparently hobbles from one crisis to the next.

On Wednesday it installed a new chairman and introduced its chief executive of three weeks to a crowd who were concerned about their dividend being taken away and when a settlement with the UK’s HM Revenue and Customs (HMRC) would be made.

Asked about that longer-term strategy by one shareholder, the company said: “We are looking at all options and we, as a new management team will come back once we’ve worked through that review.”

The new recruits now have their work cut out for them, both to satisfy shareholder desires for a dividend and to restore the company’s share price.

But those tasks won’t be easy, and IFG failed to explain exactly what happened with Saunderson House – which, the company explained, is now firmly not for sale – and how long HMRC will feature on its annual reports. Although, perhaps worryingly, the chief executive noted that “should you end up litigating the timescale can expand significantly”.

As this column has detailed before, calling the Saunderson House decision “strategy” is a bit of a stretch, but that’s in the past and the company now badly needs to strategise.

Whether the new management team are up for the task remains to be decided. Shareholders, however, will eventually lose their patience and one can only complain about “legacy issues” for so long.

A trading update before the agm showed that client recruitment for Saunderson House will likely be hit as a result of the company’s indecision on sale process. Let’s hope this is the end of that matter and that a settlement with HMRC will only be referred to in the past tense at next year’s agm.