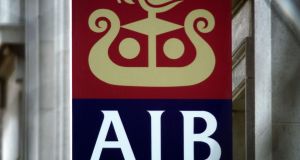 The Central Bank has confirmed to AIB the minimum requirement for own funds and eligible liabilities (MREL), or “bail-in-able” debt, that should apply to the bank, paving the way for issuance of up to €5 billion in senior debt.

In a statement to the stock exchange on Monday morning, AIB said that the Central Bank has formally communicated a MREL target set which equates to 28.04 per cent of risk weighted assets (RWA) as per the bank’s December 2016 balance sheet. This must be held at AIB Group level by January 1st 2021.

AIB is the first bank to have received confirmation from the regulator on its MREL, and according to Ronan Dunphy, economist with Investec, it is in line with expectations and previously stated guidance of € 3 billion - € 5billion of issuance.

Mr Dunphy said he expects most of the € 3-5 billion of issuance to be in the form of HoldCo senior debt, though there is some scope for T2 HoldCo issuance as well, in addition to the refinancing of existing T2 (€ 750m) and AT1 (€ 500m) with calls in 2020.

Last year AIB set up a new holding company to meet new European rules on minimising taxpayers’ exposure to ailing lenders in future. The rules mean that debt issued in future by these holding companies could be “bailed in” if needed, before State support would be drawn upon. In the debut sale from this holding company in March, it sold €500 million of five-year senior unsecured bonds.