Its derivative business trades more than $300bn a day in London 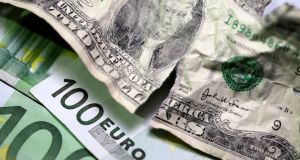 Thomson Reuters, controlled by Canada’s Thomson family, is the parent of Reuters News

Thomson Reuters is planning to transfer its widely used foreign exchange derivatives trading from London to Dublin to be ready for the UK’s departure from the EU next year.

In a media advisory note sent on Tuesday morning Thomson said it had commenced the process of applying to the Central Bank of Ireland for authorisation to operate the business here.

The move of the company’s multilateral trading facility comes directly as a result of the UK’s planned departure from the European Union, Thomson Reuters said.

It will be used to cover Thomson Reuters’ derivatives business, the largest in Europe, which trades more than $300 billion (€252 billion) a day.

The business is part of the Thomson Reuters trading operations being bought by private equity group Blackstone for $17 billion. It runs one of the world’s biggest markets for foreign exchange trading, which is widely used by banks, high-speed traders and fund managers to provide reference prices for their deals.

IDA Ireland, the State agency responsible for attracting investment, welcomed the announcement as a “very significant one”.

The memo cites concerns that customers would not be able to use passporting rights into the EU after Brexit as the reason for Thomson Reuters’ decision.

London is the biggest regulator of such licences, known as “multilateral trade facilities”, overseeing nearly half of the 150 MTFs registered in the bloc. Ireland has just four.

However, Thomson Reuters will keep its spot trading market, which trades about $100 billion a day, in London because this is outside the scope of Mifid II, Europe’s main markets rules. The technology for matching deals, and processing and settling them will also remain in London.

It has no plans to move any employees from London or elsewhere to Dublin but was hiring new staff to meet local laws, it added.

It is understood the operation will initially employ around 20 people in Ireland.

“I don’t foresee where there will be an issue as everyone is accessing the same pools of liquidity,” said Neill Penney, co-head of trading at Thomson Reuters.

Some fixed-income trading venues have opted to apply for an EU-based MTF licence alongside their London one, while choosing to go to Amsterdam. Bloomberg, Nex, MarketAxess and Tradeweb, the fixed-income venue Thomson Reuters co-owns with a consortium of banks, chose the Dutch city as a base for its transport links, and proximity to big high-frequency trading customers that dominate trading on global markets, such as Optiver, IMC and Flow Traders.

Mr Penney said it was a “close run thing” in the choice between Dublin and Amsterdam. However, he said Ireland would offer greatest continuity for clients and it was the most cost-effective solution for Thomson Reuters.

Dublin is also the legal home for many trading companies, including Virtu Financial, Citadel Securities and Susquehanna.

Thomson Reuters’ decision to keep technology and systems in London will not meet the guidance from the European Securities and Markets Authority last year that market infrastructure operators’ key activities should not be outsourced outside the EU.

Those activities include daily operations such as running the system that matches trades, and operations related to market data feeds.

However, the industry has been in discussions with regulators about keeping the technology network in the UK, because of the cost and difficulty of splitting it up. Many EU trading venues already house important technology operations in the US.

Minister for Business, Enterprise and Innovation, Heather Humphreys, said: “we represent a very attractive base in the Eurozone for these companies and we will continue to pursue new investors in this sector.”

Thomson’s announcement follows decisions from a number of banks and, more recently, law firms that plan to develop a presence here. On Tuesday, multinational law firm DLA Piper announced it was opening an office in Dublin. – Additional reporting: Copyright The Financial Times Limited 2018