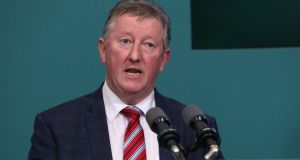 The Government has been criticised as being “no better than the banks” as a mortgage scheme for first-time buyers pulls loan offers to borrowers whose wages are being partially met by State subsidies during the Covid-19 crisis.

Galway East Independent TD Seán Canney said he had been contacted by a number of constituents who were approved for mortgages under the Rebuilding Ireland Home Loan scheme but told that they could not draw down loans as their salaries were being supported by the so-called temporary wage subsidy scheme.

These loans are funded by the Housing Finance Agency, which is on the Government’s balance sheet, but administered by local authorities.

“The Government is talking about trying to stimulate the economy when at the same time drawdowns are being refused under its own mortgage scheme,” said Mr Canney. “We’re talking about people whose jobs are safe and whose hours have not been reduced being told to go away and reapply for mortgages three months after their employer takes them off the wage subsidy scheme.”

A spokesman for the Department of Housing said there was “no blanket ban” on drawdowns by borrowers receiving wage subsidy payments under the loans scheme, which issued €269 million in loans between its launch in February 2018 and the end of 2019.

He said the department issued guidance to local authorities earlier this month saying that, in general, where applicants benefiting from the wage subsidy were approved for a loan under the scheme, drawdown would not start until their “unsupported income [after coming off the subsidy] has returned to the level specified in the original application for a period of time, usually up to three months”.

“It is important to emphasise that local authorities can use their judgment and knowledge of local employers to advance loans to applicants before the end of the three-month period, where appropriate,” he said.

“There is no blanket ban. There is no one-size-fits-all approach. It depends on the individual circumstances, and local authorities are encouraged to take those circumstances into account.”

AIB sustained widespread political criticism earlier this month when it emerged that the lender had adopted a policy of pausing the acceptance of mortgage applications from borrowers whose wages were being subsidised by the State. It subsequently announced a U-turn, saying it would take applications from such individuals and assess them on a case-by-case basis.