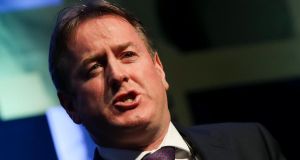 Eamonn Crowley: “This move goes a long way to addressing the discrepancy which traditionally existed between our pricing for new and existing mortgage customers.” Photograph: Maxwellphotography.ie

Permanent TSB’s (PTSB) new chief executive, Eamonn Crowley, is rejigging the lender’s mortgage offering by cutting its standard variable rate for the first time in six years and removing much of the advantage new customers have over existing borrowers when fixing rates for a period.

The development comes as Spanish bank Bankinter’s Leitrim-based finance company, Avantcard, announced on Tuesday it would offer mortgages in Ireland from the autumn through brokers – becoming the first overseas-owned lender to enter the market since Danske Bank’s ill-fated takeover of National Irish Bank in 2005.

PTSB will cut its standard variable rate next week for all customers to 3.95 per cent from 4.5 per cent, a rate that has ranked alongside Bank of Ireland’s as the highest in a market where mortgage costs are the fourth-highest in the euro zone.

The average new loan rate in the Republic was almost 2.9 per cent in May, more than double the euro-zone average, according to the Central Bank. This is partly down to the higher level of expensive capital that Irish banks must hold as a legacy of the scale of the domestic arrears crisis following the crash.

Meanwhile, new customers taking out mortgages of more than €250,000 will still be offered more favourable rates than existing PTSB clients – as low as 2.5 per cent for three-year terms.

“This move goes a long way to addressing the discrepancy which traditionally existed between our pricing for new and existing mortgage customers,” said Mr Crowley, who took over the helm last month. “We will continue to evolve our mortgage pricing strategy in this direction as we go forward in line with our ambition to further build trust with customers.”

PTSB, once the largest home loans provider in the Republic, rebuilt its share of new mortgage lending to 15.5 per cent last year from a crisis-era low of 2 per cent.

The market had become the preserve of five retail banks, led by AIB and Bank of Ireland, after the crash as Danske Bank, Bank of Scotland and a number of subprime lenders retreated and Irish Nationwide Building Society collapsed.

The planned market entry by Avantcard, a specialist in credit cards and personal loans that traces its roots back to the establishment of MBNA Europe in Ireland in 1997, would add to a growing number of non-bank lenders, including Dilosk and Finance Ireland, that have targeted Irish mortgage lending in recent years.

An Post has eyed the market, though plans for a launch of products in the first half of the year were hit by the economic fallout from Covid-19, which has seen loan approvals slump and lenders start to set aside money to cover an expected surge of bad loans.

There was speculation at the time of Bankinter’s acquisition of Avantcard in June 2019 that it might look to link up with An Post to offer home loans, as Avantcard already had a consumer finance relationship with the postal company.

However, in an interview with The Irish Times two months later, Avantcard chief executive Chris Paul said such a move was never on the agenda.

Asked on Tuesday what had changed, Mr Paul said the company had seen “how under-served customers are when it comes to mortgages”.

“So, with our knowledge of the Irish market and the backing of our parent company, Bankinter, this was the natural next step in the evolution of Avantcard,” he added.

1 Owner of Dundrum Town Centre to sell prized assets
2 Most workers now expect ability to work from home part-time
3 Elderly parents living in property you own will save you on capital gains tax
4 More than 40% of help-to-buy recipients already had deposit
5 Stocktake: Is the shoeshine indicator flashing red for stocks?
6 Pilita Clark: Working from home is starting to pall
7 Why supermarkets are struggling to profit from the online grocery boom
8 Office rentals in Dublin halved in opening six months of year due to Covid-19
9 Cinema tensions laid bare by deep crack in theatrical release windows
10 Oprah wore my dress to the Oscars to pick up a lifetime award
Real news has value SUBSCRIBE

Stocktake: Is the shoeshine indicator flashing red for stocks? 05:50
Elderly parents living in property you own will save you on capital gains tax 05:50
More than 40% of help-to-buy recipients already had deposit 05:42
Stocktake: Nervous investors don’t trust this rally 05:40
Most workers now expect ability to work from home part-time 05:35