Analysts predict provisions to rise to £5.79bn for the full year 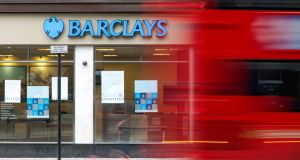 Barclays booked pre-tax profit for the first half of the year of £1.3bn, down from £3bn a year ago. Photograph: Jason Alden/Bloomberg

Barclays set aside a higher than expected £1.6 billion to cover a possible rise in loan losses in the second quarter of the year as the economic impact of the coronavirus pandemic begins to bear down on its consumer business.

Barclays was expected to report credit-impairment charges and loan-loss provisions totalling £1.42 billion for the April-June period, according to an average of analyst forecasts compiled by the bank.

While Barclays’ consumer business faltered under lower demand for credit cards and personal loans, its investment bank shone in a quarter marked by a flight to safe havens and sharp swings in most asset classes.

The fixed income, currencies and commodities division was the top performer in the corporate and investment banking unit with a 60 per cent increase in income to £1.4 billion during the second quarter.

The markets division posted a 49 per cent rise in income to £2.1 billion.

The British lender booked pre-tax profit for the first half of the year of £1.3 billion, down from £3 billion a year ago as provisions against potential bad debts outweighed improved revenues from its investment bank.

In other positive news for the bank, Barclays’ capital ratio came in at 14.2 per cent, up from 13.1 per cent at the end of March as recent regulatory changes boosted its reserves in a boon for the lender which has in recent years skated close to the lower threshold acceptable to authorities.

Barclays flagged the capital boost earlier this month. However, the bank warned its capital buffer could come under pressure in the second half of the year. – Reuters