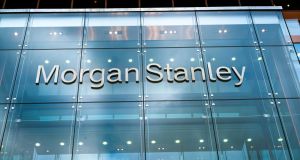 Morgan Stanley has about $480 billion under management. Photograph: iStock

Morgan Stanley has appointed Paul Price, global head of distribution at its investment management unit, to head a Dublin investment arm as it prepares for Brexit.

Mr Price became chief executive of MSIM Ireland late last year, according to his LinkedIn profile. He joined Morgan Stanley in London in 2010 from Pioneer Investments, where he was head of institutional business for four years.

The Irish executive will continue to perform his global role alongside his new responsibilities, according to an spokesman for Morgan Stanley.

Mr Price is based in Dublin, where the bank has had a presence since 2006 through its fund-services unit.

Morgan Stanley Investment Management, which has about $480 billion under management, set up its operations in Dublin to help service clients in the EU after Brexit.

Mr Price, who has 30 years of industry experience, has chaired the British-Irish Chamber of Commerce financial services panel since 2014, and is one of the most senior executives to fill a role in Dublin ahead of Brexit. He has also previously worked at Bank of Ireland and Lombard Odier.

The Morgan Stanley executive holds a Bachelor of Commerce degree from University College Dublin and an MSc in investment and treasury from Dublin City University. – Bloomberg