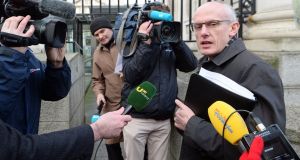 Insurance Ireland chief executive Kevin Thompson, who told The Irish Times that access to Insurance Link was not exclusively available through or dependent upon membership of the industry body. Photograph: Eric Luke

The Competition and Consumer Protection Committee (CCPC) is in the “latter stages” of an investigation launched almost three years ago into whether motor insurers and brokers have engaged in anti-competitive practices by openly signalling premium price moves.

The news came as the European Commission started a formally investigation into whether Insurance Ireland, an industry body, has been operating a cartel by restricting access to a claims database.

“In the course of the investigation, the CCPC has examined considerable information and potential lines of inquiry,” a spokeswoman for the authority said. “Fifty-five witness summons hearings have taken place and the CCPC has obtained over 1.4 million emails and documents from parties under investigation.”

Cases of competition law breaches can lead to legal proceedings and fines of up to €5 million or €10 per cent of a company’s annual sales, as well as imprisonment for up to 10 years for individuals involved.

Motor insurance premiums soared more than 70 per cent over three years before peaking in 2016, a period when the industry was largely loss-making in the State. While the cost of vehicle coverage has since fallen back, employers’ liability and public liability coverage has been increasing in recent times.

Irish insurers returned to profit in motor coverage in 2017, as the industry posted a surplus of €31.1 million from this line of business, after racking up €757 million of losses over the previous four years from covering drivers and vehicles.

However, employers liability and public liability lines of insurance remained loss-making that year, according to the most recent data available from Insurance Ireland.

The commission’s investigation into Insurance Ireland centres around whether it has restricted access to a database, called Insurance Link, which allows members of the organisation and large corporations that insure themselves to access the claims history of individuals seeking to take out a new policy with a fresh provider.

“We are investigating whether companies wishing to offer their services on the Irish motor insurance market may have been unfairly prevented from accessing a data pool managed by Insurance Ireland for member companies,” said EU competition commissioner Margrethe Vestager.

Insurance Ireland’s chief executive, Kevin Thompson, said in a statement issued to The Irish Times that access to Insurance Link was not exclusively available through or dependent upon membership of the industry body.

Meanwhile, EU sources said the commission has dropped a separate investigation into concerns of anti-competitive practices in the market for insuring trucks and lorries in the Republic.