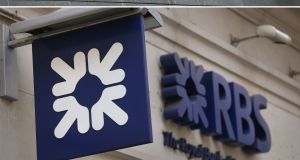 Barclays and Royal Bank of Scotland (RBS) were among five banks hit with a €1.07bn fine for taking part in a foreign exchange trading cartel. Photograph: Philip Toscano/PA Wire

Brussels has fined Barclays, RBS, Citigroup, JPMorgan and Japanese bank MUFG just over €1 billion for participating in cartels to manipulate the foreign exchange market for 11 currencies, drawing a line under global regulatory investigations into the behaviour of their traders.

EU officials found that two separate cartels used chat rooms to share information about customers’ orders, prices and other trading activities in order to manipulate in the spot markets between 2007 to 2013 for the euro, pound, yen, Swiss franc, US, Canadian, New Zealand and Australian dollars, and Danish, Swedish and Norwegian crowns.

The information shared “enabled them to make informed market decisions on whether to sell or buy the currencies they had in their portfolios and when. Occasionally, these information exchanges also allowed the traders to identify opportunities for co-ordination”, according to the enforcers.

Margrethe Vestager, European competition commissioner, said: “Foreign exchange spot trading activities are one of the largest markets in the world, worth billions of euro every day. Today we have fined Barclays, the Royal Bank of Scotland, Citigroup, JPMorgan and MUFG Bank and these cartel decisions send a clear message that the commission will not tolerate collusive behaviour in any sector of the financial markets.”

Who was the whistleblower?

UBS participated in the cartels but was not fined as they alerted EU officials to the two cartels. The other banks chose to settle the charges with EU regulators and their fines were reduced by 10 per cent.

The EU is the last major regulatory authority to conclude its investigation into claims that traders manipulated major currency benchmarks and exchange rates – allegations that first surfaced in 2013.

Authorities in the UK, US, Switzerland and Singapore started giving out a total of more than $10 billion in fines to 15 banks from late 2014, while investigations have also led to multibillion-dollar settlements in civil cases.

Thursday’s decision does not fully close the matter as there are lawsuits filed in the US and Britain against some banks to recover damages on behalf of several investment managers.

In addition, the EU Commission said they have another investigation involving Credit Suisse, regarding “an alleged infringement which may have taken place in another chatroom” but declined to provide any further details on this case. – Copyright The Financial Times Limited 2019

1 Aer Lingus confirms job cuts due to ‘decimation in demand’
2 Why is Germany suddenly embracing its inner Keynesian?
3 Major credit union plans to limit savings accounts to €40,000
4 Passengers face queuing in car parks at Dublin Airport
5 Woodchester founder Craig McKinney dies
6 Avoca wins battle with Monkstown locals over cafe operation
7 Brother is dragging his heels as executor of uncle’s will - is there anything I can do?
8 Domestic economy may get boost from multinationals
9 Tesco to cut emissions by converting waste food from Irish stores to gas
10 Student accommodation sector set for harsh Covid-19 lesson
Real news has value SUBSCRIBE