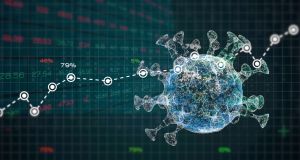 The State’s five retail banks set aside a combined €2.6 billion of provisions to absorb an expected surge in bad loan losses. Image: iStock

If anything, Irish bank chiefs were decidedly more upbeat this week on the prospects for the economy – and their own businesses – than three months ago, during peak of Covid-19 restrictions.

Take Permanent TSB (PTSB). In May, the mortgage lender forecast that its new lending would fall by as much as 50 per cent this year. At the time, building had ground to a halt, borrowers were seeking payment breaks in their thousands, and the brave few home buyers out there had to make do with virtual viewings.

However, the bank accompanied the release of its results for the first half of the year on Tuesday by saying it now sees new lending falling 40 per cent, following a jump in demand for home loans in recent weeks. On a call with analysts, its new chief executive, Eamonn Crowley, said the decline “may not be as bad as 40 per cent” – assuming there aren’t further widespread coronavirus lockdowns.

Bank of Ireland estimated on Wednesday its new lending volumes are likely to fall 30 per cent this year, compared to its prior forecast of as much as a 50 per cent slump. Its new view that business income will plunge 20-30 per cent marks an improvement from the slide of up to 40 per cent chief executive Francesca McDonagh was talking about a few months ago.

And while AIB lowered its financial forecasts for the full year on Thursday, the new figures are not as bad as might have been feared. CEO Colin Hunt sees net interest income coming in at around €1.9 billion, some 5 per cent lower than what it had expected before the crisis. Other income is projected to come to about €420 million, down from €500 million to €550 million previously.

But if bank bosses had become more upbeat in their view of the world from their makeshift home offices in recent months, you were not going to see it in the headline figures they released this week.

The State’s five retail banks – including overseas-owned Ulster Bank and KBC Bank Ireland – set aside a combined €2.6 billion of provisions to absorb an expected surge in bad loan losses as a result of the economic shock caused by the pandemic. The figure was much bigger than the market had expected – pushing the industry into loss-making territory for the first time since 2013.

The level of customer defaults remain low. For the moment. That’s largely thanks to payment breaks introduced by the banks for households and small businesses as the virus started to spread at pace through the Republic in March.

But new accountancy rules introduced in recent years – known as IFRS 9 – force banks to start setting aside impairment provisions as soon as soon they begin to fear loans may run into problems in the future. Previously, banks were largely prevented from booking provisions until loans had actually soured.

Under the new forward-looking measures, banks have to disclose their best-to-worst case economic forecasts and assign odds against each scenario turning out to be the case when working out what level of provisions to take.

Lenders have revealed a big spike in potentially problematic loans. Bank of Ireland now has €11.3 billion of loans classified as having become significantly risker than when they were granted – or what regulatory wonks refer to as “stage 2” financial assets. That’s more than double the figure at the end of December.

At AIB, the figure has jumped by more than 250 per cent to €10.5 billion. Stage 2 is just a staging post. Borrowers who find their loans in here will either go into default (and all the problems that entails), or, if all goes well, they will fall back into the low-risk category and be none-the-wiser that their bank had been taking precautionary provisions against their loans.

Still, overseas analysts that dialled into a call with AIB executives on Thursday were scratching their heads about the scale of Irish banks’ loan-loss provisioning for the first-half, coming in well above what the market had been expected – and at the upper end the scale, relative to loan book size, among European peers.

But even among the domestic lenders, AIB’s €1.2 billion charge stood out against the €937 million ringfenced by Bank of Ireland.

“Your provisioning numbers are just bigger than anybody else’s,” Bank of America Merrill Lynch analyst Alastair Ryan said on the AIB call. “Is there something you’ve learned about your [loan] book that you haven’t liked?”

The answer lies in in the trauma experienced in the Republic during the financial crisis, replied AIB chief financial officer Donal Galvin. AIB, we hardly need reminding, required a €20.8 billion bailout following the property crash.

Banks must factor in previous experience when coming up with prediction models. Punch pessimistic economic forecasts into the system of a bank in the Republic, home to Europe’s biggest banking crisis, and you’re going to get some big loan-loss numbers.

“I think the difference, frankly, between AIB and UK banks quite simply is that our history is different. History drives the models,” said Galvin.

There’s also a clear appetite among Irish banks to frontload the expected losses as much as possible – mindful of how the drip-feeding of bad news during and following the crash only delayed a recovery. It’s also easier, of course, for a bank to face up to problems if they are caused by an outside force, such as Covid-19, and not the type of reckless lending that fuelled the last crisis.

All of the State’s banks say that the level of loan charges taken in the first half will mark a peak – even if many of the risky loans won’t actually go into default until 2021.

Recent history, and a virus that’s on the rampage again, advise caution.