Claims have been lower than normal due to lockdown traffic slump 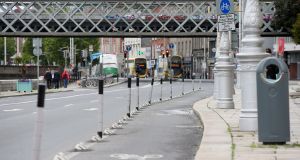 Retail insurers will use windfall gains from the coronavirus pandemic to keep motor premiums down next year to restore the sector’s reputation, according to a report by ratings agency Moody’s.

Traffic volumes slumped during lockdown by more than 70 per cent, as cars went unused while their owners stayed at home. The Moody’s researchers highlighted that this will lead to windfall profits for many European motor insurance companies, due to lower than usual claims.

For example, MAIF in France reported an 80 per cent decrease in the frequency of its motor claims for the second half of March, the report states, while its rival Matmut saw a decline of up to 70 per cent. Moody’s says those declines are likely to be replicated across Europe.

It said that retail insurers are therefore coming under increasing pressure from politicians and the media to pass on any windfall gains from the pandemic.

Five of the biggest Irish insurers, including Allianz, Axa, FBD, RSA and Zurich, already agreed at the height of the pandemic in April to give rebates to customers.

The payments were generally only about €30 per policy, however, and were distributed in many cases in the form of gift vouchers.

Meanwhile, commercial insurers are under public pressure in some countries to pay out on business interruption policies for shuttered bars, shops and restaurants that were unable to trade due to government restrictions.

Many insurers have been declining claims on the basis that pandemics are not covered by the policies, and the issue has led to ongoing court cases in several countries including Ireland. The regulator here has decreed that in cases where policy cover for pandemics is unclear, claimants should be given the benefit of the doubt.

Moody’s said it believes some European commercial insurers “will likely ultimately have to honour some of the claims they initially rejected”.

“We expect insurers to respond to these social, political and legal pressures by keeping their prices low in order to restore their reputations,” said the Moody’s researchers.

“This will fuel further competition, particularly in the retail and SME markets. Retail insurers will find it harder to justify price increases after a year of lower claims, while small business policyholders may struggle to absorb higher premiums due to the economic slowdown.”

Moody’s also said it believes that rebates and ex-gratia payments to motor customers will eventually wipe out any one-off gains for insurers from the pandemic. It also said such profits “harm the industry’s image”.

“Insurers’ one-off gains coincided with a sharp deterioration in the finances of many households and corporates, undermining public perceptions of the insurance industry. Insurers’ refusal to pay business interruption claims due to pandemic exclusion clauses exacerbated this,” said the researchers.

Moyagh Murdock, the chief executive of Insurance Ireland, told RTÉ Radio 1 broadcaster Sarah McInerney last week that she expects that any benefits to insurers from reduced claims during lockdown will be passed on to customers.

Ms Murdock insisted that, despite the low level of rebates so far from Irish insurers, she believes they have “stepped up to the plate”.