ICS Mortgages wrongly identified more than 1,000 of its mortgage customers to the new credit register as having distressed loans 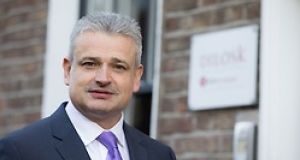 Fergal McGrath, chief executive of Dilosk: the company says it has not been sanctioned by the Central Bank for this error, but that it is liaising with both the regulator and the Data Protection Commission .

More than 1,000 customers of ICS Mortgages may have had their ability to access new credit damaged as a result of an error in submitting information on their existing mortgages to the new credit register, run by the Central Bank of Ireland.

ICS Mortgages, a subsidiary of non-bank lender Dilosk, has written to some 1,067 buy-to-let and owner-occupier mortgage-holders to tell them that it passed on incorrect information on their loans to the Central Credit Register (CCR).

In the letter, ICS outlines that it incorrectly informed the register, which was set up by the Central Bank in 2018 to offer a centralised credit-rating system, that these mortgages were distressed, when in fact they were not. Lenders typically check the register when considering a loan application.

It’s understood that all the loans impacted had benefited from a rate reduction – not due to any financial difficulty – but that this fact was wrongly conveyed to the CCR as being a “restructure event”, which would indicate that the loan was in arrears, when they were not.

The incorrect data was first submitted in December 2017 and “this was fully rectified by July 31st, 2019”, a spokeswoman for Dilosk said.

The mistake means that if an affected customer had sought credit from another source between March 2018, when the credit register went live, up until the information was rectified, they would likely have been refused an additional loan, given the apparent condition of their mortgage.

The spokeswoman said that eight customers have told the lender that they have been adversely impacted by the error.

“We are working with these customers directly to resolve any adverse effect this may have had,” she said.

ICS/Dilosk said it has not been sanctioned by the Central Bank for this error, but that it is liaising with both the regulator and the Data Protection Commission.