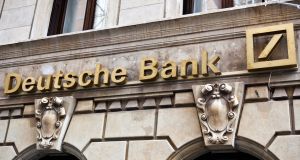 Deutsche Bank has angered an already nervous overseas workforce by tightening holiday rules and ending long-service awards for its 50,000 staff outside Germany.

A ban on carrying forward unused annual leave at the end of the year has been imposed with immediate effect, leaving workers little time to rearrange their holiday plans, while 10, 25 and 40-year service awards will be ditched from October.

“While these changes may be disappointing, we can assure you that we remain committed to offering competitive benefits and effective initiatives that support your health and wellbeing, enabling you to be the best you can in your professional lives,” Deutsche’s UK chief executive Tiina Lee and UK head of human resources Rachel Blanshard wrote in an email to staff.

According to its website, Deutsche Bank employs more than 650 people in Dublin.

The policy shift comes at a fraught time for employees of Germany’s largest lender, with 18,000 jobs set to disappear under one of the most radical investment bank restructurings since the global financial crisis.

It rankles particularly because it does not apply to Deutsche’s 41,000 employees in its home market, who can carry forward up to 10 days of holiday into the first three months of the subsequent year and will still receive service awards.

“There’s no loyalty at Deutsche any more,” said one senior overseas manager. “The cash awards are not massive but are nice to have. Between that and cutting back on carrying over holidays it really hasn’t helped the mood.”

The benefit changes are part of Deutsche’s “cost catalyst” initiative, according to the email, as reported by the Financial Times, and will help the bank reduce expenses as accounting rules force companies to build provisions for holiday entitlements that are carried forward from one fiscal year to the next.

One person familiar with the lender’s internal discussions said German employment law made it harder to change employee entitlements in the country retrospectively.

Deutsche’s sweeping shake-up announced just over a month ago is well under way. By the end of July, about 900 staff had been fired or given notice. One person briefed on the bank’s next steps said it was planning to step up job cuts significantly by the end of September.

Senior staff expect the axe to fall first on jobs in the UK and the US, where flexible employment protection laws and weak unions make it cheaper and easier to fire employees.