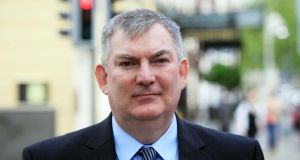 Kevin Cardiff, former secretary general in the Department of Finance, has joined the board of KBC Bank Ireland as a non-executive director.

Mr Cardiff took up the position on August 3rd and joins other non-executive directors Christine Van Rijsseghem, Willem Hueting, Robert Power and John Malone on the board of the Belgian-owned bank.

According to his LinkedIn profile, Mr Cardiff has been self-employed as a consultant since March and also acts as chairman of the board of auditors of the European Stability Mechanism.

As second secretary general of the Department of Finance from 2006 to 2010 and secretary general from 2010 to February 2012, Mr Cardiff was the department’s most senior civil servant during the financial crisis. He published a book on the events of this period, Recap: Inside Ireland’s Financial Crisis, in 2016.

Mr Cardiff joined the European Court of Auditors in 2012, a position he held until February of this year. Mr Cardiff’s application for the court, which oversees the EU’s annual accounts and carries out investigations into EU-funded programmes, was initially rejected by the European Parliament but later approved. Tony Murphy succeeded him in the role.