Insurance chiefs say 71 per cent of firms will have cyber cover in five years, report says 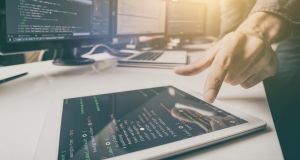 Insurers in Ireland do not have adequate data to price cybersecurity insurance, despite it becoming “as prevalent as all other insurance” products, PwC has said.

The firm’s annual survey of insurance industry leaders found that 71 per cent believe the majority of Irish businesses will have cyber insurance in five years’ time. With the instances of cyber attacks increasing, PwC insurance partner Páraic Joyce expects insurance of this type to become more widespread.

However, he told The Irish Times that companies are struggling to understand the exact peril and what should be covered.

“Companies are still trying to come up with a cyber product,” he said, noting that coverage currently exists to deal with the immediate aftermath of an attack. “But it doesn’t cover the cost of people who have grievances that their data has been taken.

“In order to be able to price it you have to be able to cost it and make a determination as to how often these things are going to happen,” he said, adding that the number of companies offering cyber products are in the minority.

The survey, in association with Insurance Ireland, showed that nearly one in five saw product innovation and diversification as the single most important driver of growth. But 66 per cent of chief executives said the industry had more to do to respond to changing purchasing habits.

PwC’s survey showed the Irish industry is one where leaders are generally confident about the direction of travel. More than eight in 10 chief executives were confident about business growth, although that dropped slightly on last year’s level.

That fall in optimism came as Brexit was viewed as more of a business disruptor than it was last year. Some 17 per cent of participants surveyed with UK operations reported their company is considering relocating some or all of their operations to Ireland, down from 26 per cent last year.

Responding to questions specifically on the Irish market, fewer than one in four insurers said they believed addressing the Republic’s claim culture should be the Government’s number-one priority. However, Mr Joyce said this was a function of those surveyed, considering the report included chief executives of reinsurance companies with Irish operations.

Insurance Ireland chief executive Kevin Thompson said that while the industry is confident about growth, it’s keenly aware of industry challenges. “The message from chief executives on this is very clear, in an uncertain climate we need to control the issues we can. Chief among these issues are the need for a policy focus on competitiveness and addressing the cost of claims in general insurance.”

The report found that more than three-quarters of chief executives see the Irish regulatory regime as being more demanding compared with other European Union locations.

“Whatever the outcome of Brexit, it will be important that Ireland continues to develop as a centre of excellence for global insurance companies. With a highly talented English-speaking workforce, a friendly business environment and access to an EU market of more than 440 million consumers following Brexit, Ireland needs to continue to work hard to maintain and improve its national competitiveness to ensure we can continue to secure insurance foreign direct investment,” Mr Joyce said.