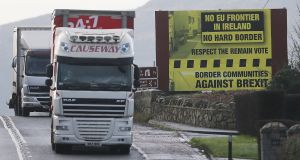 A truck passes a Brexit billboard in Jonesborough, Co. Armagh, on the northern side of the Border. Photograph: Niall Carson/PA

Growing numbers of people living close to the Border may be putting cash aside as a safeguard against any fallout from Brexit, according to a survey published on Monday.

The Bank of Ireland/Economic and Social Research Institute savings and investment index shows that 51 per cent of people quizzed about their savings habits last month were happy with the sums they were putting aside. Just under half those questioned said that they were regular savers.

The survey found an increase in the number of people living close to the Border who were saving regularly or occasionally which the bank said could “indicate extra precautionary savings as Brexit uncertainties rumble on”.

The Border between the Republic and Northern Ireland is a flashpoint in the talks between the EU negotiators, led by Michel Barnier, and the UK prime minister, Theresa May.

Locals on both sides fear that if the UK crashes out of the EU without a deal – a so-called hard Brexit – this could see the return of checkpoints, hitting economic activity and possibly affecting the Northern Ireland peace process.

A majority of people living in Northern Ireland voted to remain in the EU in a referendum in 2016.

However, a larger number of English voters opted to leave the world’s biggest trading bloc.