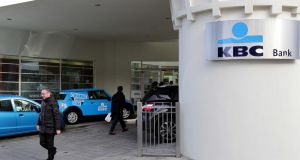 KBC Bank outlined some of the reasons why Ireland is attractive for banks, doing some of the work for Minister of Finance Michael Noonan him ahead of an AIB stake sale. Photograph: Dara Mac Dónaill

Michael Noonan was out with a reaction within minutes of KBC Group’s 6am announcement on Thursday of decision to remain in the Irish market.

“The fact that KBC is committed to remaining in Ireland ensures continuing competition in the Irish banking market which is good for consumers,” Noonan said. “Such commitment is also a mark of the robust market and of its continuing growth potential into the future.”

He may have been mightily relieved that the Belgians, in Ireland for almost four decades, had decided to stay, but there was another bank at the back of his mind as he penned those words – AIB.

With the Government looking to sell a 25 per cent stake in AIB, which received a €21.8 billion bailout during the financial crisis, as early as May or June, it would have had a challenge to explain to investors why they should commit their money if KBC decided to pull the plug on its Irish operation.

Instead, KBC group chief executive Johan Thijs, holder of a masters in applied maths and lifer a Belgium’s largest bank by market value, has decided to turn up the volume in Ireland, giving his executives the nod to grow and even bring potential banking and insurance deals to the table if they crop up. He’s emerged, as a result, as an unlikely and unwitting ally for Noonan as the Department of Finance works on plans for an AIB initial public offering (IPO)

“KBC’s decision to remain in Ireland and look to expand their offering suggests that the banking environment here looks increasingly attractive to foreign banking groups,” said Owen Callan, an analyst with Investec in Dublin. “This sort of development should add further appeal to investors looking at getting involved in any AIB IPO.”

It is understood that KBC Group was pressed in 2009 by the European Commission, under a restructuring plan following the Brussels-based group’s own bailout during the financial crisis, to commit to the Irish market until at least 2014, as it was clear to authorities that competition in the Republic was set to evaporate in the wake of the property-market collapse.

The commission was right. A number of overseas banks have pulled out of the Irish market in the past seven years, led by Bank of Scotland in 2010 after its parent, Lloyds Banking Group, which decided to sell off its €30 billion-plus Irish loan book just months before the State entered an international bailout. Bank of Scotland had entered Ireland in 1999 and introduced tracker mortgages to the market two years later.

Denmark’s Danske Bank, which took over National Irish Bank in 2005, decided four years ago to exit the retail banking business in the Republic after racking up massive bad-loan losses, while Dutch lender Rabobank surrendered the banking license of its ACCBank unit in 2014.

All have suffered multi-billion-euro, unrecoverable losses. KBC, which has a €13.1 billion Irish loan book, less than 5 per cent of the group’s total, would have been in the same situation if it decided to exit at its first opportunity in 2014. With KBC Bank Ireland having returned to profit in 2015 and built on that last year, it is only now in a position to start paying back its €1.4 billion parental bailout.

KBC Bank Ireland chief executive Wim Verbraeken told The Irish Times On Thursday the bank has taken “a number of technical steps” to start paying a dividend this year. “I think the commitment of KBC Group to the Irish market is testimony to our belief that we have a viable operation,” Verbraeken said.

“Ireland has been Europe’s fastest growing economy for the last two year and demonstrated a remarkable capability to recover from the financial crisis,” one of the KBC officials said in one of its points. “The performance of export sectors has remained robust. The upswing in domestic demand is even more striking. Consumer spending has picked up noticeably and construction activity has begun to increase.”

It goes on for six slides.

Corporate financiers at Bank of America Merrill Lynch, Davy and Deutsche Bank, whom Noonan hired in December to help out with an AIB share sale, as well the Irish bank’s own advisers in Morgan Stanley and Goodbody Stockbrokers, were surely taking notes.