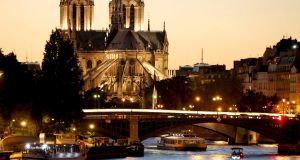 Parisian officials pitching to refugees from Brexit-hit London are appealing to bankers’ hearts as well as their wallets. “When was the last time you took your partner off for a weekend in Frankfurt?” said Valerie Pecresse, president of the Paris region, at a press conference in London following a private meeting with 80 financiers and asset managers on Monday.

“If you want to live somewhere you look at all the qualities of the cultural life, of cooking, of health care, children’s care, and in this aspect Paris rates first in continental Europe.”

Paris is competing with rival cities including Dublin and Frankfurt for talent as banks prepare to establish new hubs inside the European Union before Britain exits the bloc, expected in 2019.

Global bank chiefs have warned the British prime minister, Theresa May, that they will soon start shifting operations and jobs from London. The City of Love could lure more than 20,000 workers, said Arnaud de Bresson, the managing director of Europlace, the French capital’s lobby group. Paris is positioning itself as the only global financial centre remaining in the EU after Brexit.

Europlace’s marketing materials extol how the French capital is already home to the region’s biggest bond market and boasts the second-largest pool of asset managers.

“Paris is the only global, world city like London in Europe,” said Jean-Louis Missika, vice-mayor of Paris. “We are, together with London, the only city with a leading financial platform, world class industrial headquarters, vibrant innovation ecosystem and a unique university and research capacity.”

Although it hosts some of Europe’s biggest banks, France lags behind the UK and Germany as an international hub for banking. The country is perceived as hostile to financial companies and ranks 29th in the Global Financial Centres Index compiled by Z/Yen, only one spot above Casablanca. Richard Boggis-Rolfe, chairman of recruitment firm Odgers Berndtson, told a conference last week that bankers had recently been irked at a presentation in Paris when it was conducted in French.

A similar issue arose at Monday’s press conference when the president of greater Paris metropolis, Patrick Ollier, switched to French half way through his presentation before being told firmly by a colleague that he must speak in English.

Frankfurt and Dublin are emerging as the biggest winners at London’s expense from Brexit. Standard Chartered and Barclays are considering choosing Ireland’s capital as their EU base for ensuring continued access to the trading bloc. Goldman Sachs and Citigroup are eyeing Frankfurt. HSBC Holdings is the only bank to commit to moving people to Paris, saying as many as 1,000 traders could be relocated.

“The depth of talent here, our attractiveness as a place to work and live, and assets like English rule of law, language and our regulatory landscape will mean we remain the number one global financial centre,” Mark Boleat, policy chairman at the City of London , said in an emailed statement. “As we would expect, cities like Paris are competing for trade and the associated jobs that come with these businesses.”