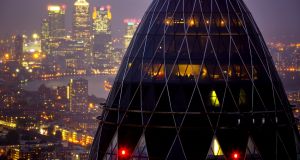 Last year KKR had mooted a potential move to Dublin if the UK voted to leave the EU. Photograph: Jason Alden/Bloomberg

KKR is merging its hedge fund of funds business KKR Prisma with a larger rival, Paamco, in a deal that highlights the difficult hunt for growth in the once-hot area of the hedge fund industry.

While the traditional business providing investors with hard-to-get access to elite managers has been declining, surviving fund of funds adapted and now provide a wider range of investment help to clients.

Paamco, which is based in Irvine, California and which has $24 billion (€22.5 billion) in assets under management or advisement, has expanded into direct trading of emerging market equities. Both firms are building customised hedge fund portfolios for investors or making co-investments with underlying managers.

Prisma is managing about $10 billion, according to the company, compared with $11 billion at the start of last year. Combining the two firms will create one of the top three largest fund of funds businesses, they said.

KKR’s Irish operation, which is led by former Ulster Bank and AIB banker Robert Gallagher, has made a number of Irish investments, including linking up with the Ireland Strategic Investment Fund for a €500 billion homebuilding joint venture.

The merged company, which is to be called Paamco Prisma, will have “added scale benefits, wider investment options and faster innovation”, said Jane Buchan, Paamco chief executive, who will be co-chief executive of the new company along with Prisma founder Girish Reddy.

“Our size should help us negotiate better terms with our underlying managers,” Mr Reddy said.

Mr Reddy founded Prisma in 2004 with two other former Goldman Sachs partners, Gavyn Davies and Thomas Healey. KKR acquired the firm in 2012 as part of its expansion beyond private equity into hedge funds and other alternative investments. Mr Davies, a former chairman of the BBC and a regular writer for the Financial Times, and Mr Healey will remain senior advisers to Paamco Prisma.

Existing employees will own a combined 60.1 per cent of the company, leaving KKR with 39.9 per cent. None of the employees nor KKR is taking money out as part of the deal.

By limiting KKR’s stake, Paamco Prisma will be able to make co-investments with the underlying hedge fund managers without having to run them through KKR’s compliance. This had been a source of frustration to Prisma, given KKR’s sprawling business interests and risks of conflict.

The number of traditional hedge fund of funds has declined since the pre-financial crisis boom, according to industry data. HFR recorded 1,567 such funds at the end of last year, down from 2,462 in 2007 as investors pulled assets and squeezed fees to a point where some firms exited the industry.