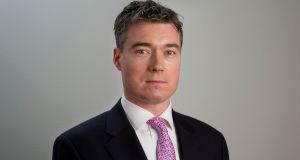 US banking giant JP Morgan has promoted Irish man Conor Hillery to the position of co-head of investment banking for the group’s Europe, Middle East and Africa (Emea) regions as part of overhaul of its top team of dealmakers.

JP Morgan ranked as the top advisory firm globally on mergers and acquisition deals in 2019, working on almost $195 billion (€180.8 billion) worth of transactions, according to data provider Dealogic.

The series of promotions, involving eight bankers, underscore how big investment banks are under growing pressure to retain top staff as they face increasing competition from smaller boutique firms, according to Reuters, which first reported the rejig.

Originally from Dublin, Mr Hillery completed a bachelor of commerce degree in University College Dublin before training as a chartered accountant with KPMG. He subsequently joined Kleinwort Benson in London, before moving to stockbrokers Cazenove in 2002. JP Morgan bought Cazenove in 2010.

JP Morgan worked with Davy as financial advisers to Green Reit as the real-estate property trust was sold to UK-based Henderson Park in November for €1.34 billion. The company was among a number of investment banks that worked on AIB’s €3.4 billion initial public offering in 2017.

The Wall Street bank was appointed last November as joint corporate broker to AIB alongside Goodbody Stockbrokers. It is also a joint broker with Davy to Dublin-based fuel distribution-to-health services group DCC.

JP Morgan’s Irish unit, which can trace its roots to 1962, opened a new office in Dublin last March giving it capacity to double its local workforce to 1,100 over time. This business is led by Carin Bryans.