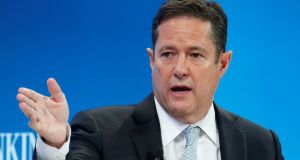 Britain’s financial regulators are investigating historical links between Barclays chief executive Jes Staley and the US financier Jeffrey Epstein, who died while awaiting trial on sex trafficking charges, the bank said on Thursday.

The UK’s Financial Conduct Authority and the Prudential Regulation Authority are investigating.

The bank said its board believes Mr Staley has been sufficiently transparent about his ties to Epstein, whom Mr Staley said he had not seen since taking over as Barclays chief executive in 2015.

The New York Times last year said that Epstein had referred “dozens” of wealthy clients to Mr Staley when the chief executive ran JPMorgan’s private banking business. It also reported that Mr Staley visited Epstein in prison when he was serving a sentence between 2008-09 for soliciting prostitution.

Barclays has previously said that Mr Staley never engaged or paid fees to Epstein to advise him or provide professional services.

Both Staley and finance director Tushar Morzaria took cuts to their pension allowances in 2019, and will now receive fixed cash contributions equating to 10 per cent of salary in line with the broader workforce.

Lower-paid employees will see their employer pension contributions rise to 12 per cent.

The bank meanwhile reported a better-than-expected profit before tax of £6.2 billion for 2019, as its investment bank reported bumper returns from fixed-income trading.

Its profit was 9 per cent higher than in 2018 and above the £5.7 billion average of analysts’ forecasts compiled by the bank.

The British lender also reiterated its ambition of achieving a 10 per cent return on equity this year, although it repeated a warning from October that the worsening economic outlook might make reaching that target difficulty.

Mr Staley has said that Barclays’ mix of investment and retail banking businesses should partly insulate it from economic and market fluctuations.

Barclays paid a dividend of 9 pence for the year, compared with 6.5 pence for 2018, as its core capital ratio came in at a better-than-expected 13.8 per cent. – Reuters