Who is Michael Milken, the junk bond king pardoned by Trump? 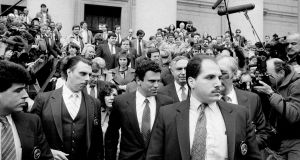 Thirty years after his conviction for securities fraud, and 20 years after he began asking US presidents to pardon him, junk bond king Michael Milken once again finds himself being cheered by some on Wall Street after winning clemency from Donald Trump.

“Mike’s pardon is spectacular for our industry, the thousands of people who either worked with him or were clients at Drexel, and society at large,” said Rich Handler, chief executive at the investment bank Jefferies.

Mr Handler worked with Mr Milken at the investment bank Drexel Burnham Lambert which collapsed in 1990 after Mr Milken’s arrest and conviction led to insurmountable reputational damage for his organisation.

The scandal marked the end of a feted Wall Street career for Mr Milken, who was widely credited as the inventor of junk bonds that enabled everyone from Hilton to Time Warner to the homebuilder Toll Brothers to borrow money at higher interest rates to fund riskier projects.

But his downfall was as controversial on Wall Street as the bond trading frenzy he had stoked, and he maintained a legion of supporters. Mr Handler told the Financial Times he counts Mr Milken as “a mentor and a friend” - a stance shared by several of Drexel’s alumni who have gone on to powerful positions elsewhere on Wall Street as well as others in the world of finance.

Mr Milken (73) was sentenced in 1990 to 10 years in prison after pleading guilty to racketeering and securities fraud charges. He ultimately served 22 months in jail, after co-operating with federal investigators. The Securities and Exchange Commission permanently barred Mr Milken from the securities industry in 1991, and he has spent the three decades working as a philanthropist.

David Rubenstein, who co-founded the leveraged buyout firm Carlyle Group, described Mr Milken’s pardon as “well deserved” and said he was “proud” to be among the 33 individuals listed on a White House statement as having supported the clemency petition.

Other Drexel alumni including Apollo co-founder Josh Harris and Canyon Capital boss Josh Friedman also formally supported Mr Milken’s latest clemency bid, which followed failed attempts at a pardon from the Clinton administration in 2001 and the Bush administration in 2008.

“There was a pretty fierce loyalty to Michael and Drexel as a whole at the company, and although his behaviour deserved punishment, and most at the firm acknowledged that, he was seen as an innovator, almost like a god,” said Michael Michalakis, who began his career at Drexel only to see the firm collapse within a year of joining.

David Solomon, chief executive of Goldman Sachs, has spoken publicly in support of Mr Milken, praising Drexel’s “inspiring entrepreneurial culture” in a 2017 interview and said working there from 1986 to 1990 made him “much more compelling and effective” as he built his subsequent career.

Wall Street’s regard for Mr Milken goes beyond his former colleagues. George Muzinich, who founded the New York-based fixed income house Muzinich & Co, said what Mr Milken did “was exceptional, he was a great innovator, he made US business much more dynamic. [WHEN THE] Japanese were ruling the roost, he brought a new dynamic to the business.”

While Mr Milken was banned from working in the financial services industry under the terms of his indictment, he has maintained close ties to his friends from his 11-year career on Wall Street.

“He is already a trusted adviser to more CEOs than all the finance CEOs combined,” said one friend. “He just does it out of friendship and kindness and intellectual challenge.”

The White House described Mr Milken as “one of America’s greatest financiers”, praising him for work that “democratised finance” by helping small firms to access capital and appearing to sow doubt about the charges laid against him.

“Mr Milken was charged in an indictment alleging that some of his innovative financing mechanisms were in fact criminal schemes,” the statement on his clemency said. “The charges filed against Mr Milken were truly novel.”

Mr Milken’s pardon was also backed by high-profile figures in politics and media as well as finance, according to the White House. They included: Sheldon Adelson, the casino owner and Republican donor; Rupert Murdoch, the media mogul; Elaine Chao, US transport secretary and wife of Mitch McConnell, the US Senate majority leader; Sean Parker, the Facebook investor; and Rudy Giuliani, the president’s personal attorney who headed the US attorney’s office in Manhattan when it investigated Mr Milken.

The statement went on to praise him for “dedicating his life to philanthropy” following the end of his Wall Street career.

Having fought prostate cancer himself in 1993 and witnessed his father and mother-in-law face other cancers, Mr Milken made medical research his primary focus after he was released from prison in 1993, having served two years of an initial 10-year sentence.

The Milken Family Foundation sponsors research, holds conferences and claims to have dispersed hundreds of millions of dollars in donations and worked with more than 1,000 organisations around the world to drive pioneering treatments.

David Boies, managing partner at the law firm Boies Schiller Flexner said the presidential pardon meant Mr Milken was now in a position to apply to the Securities and Exchange Commission to lift its ban on him working in the finance industry. “And I think that the SEC could very well take into account the same factors that led to the pardon,” Mr Boies said.

The SEC declined to comment. Mr Milken’s spokesman would not say whether he plans to apply to have the ban lifted but said that returning to finance was “the farthest thing from his mind. He just returned from a two-week trip to nine cities on three continents where he hosted events with attendees from 40 countries. Main topic: how to accelerate medical research. That’s his focus.”

Asked if Mr Milken would be celebrating his reprieve, his spokesman replied: “As long as people are dying from serious diseases, he won’t be celebrating.” – Copyright The Financial Times Limited 2020