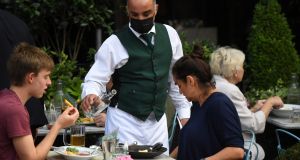 Moody’s said the new round of restrictions to curb the spread of the coronavirus would compound economic and financial losses in consumer-facing sectors such as hospitality. Photograph: EPA

Irish banks are likely to suffer bigger loan impairment charges as a result of the move to Level 5 restrictions, Moody’s has warned.

In a note, the global ratings agency said the new round of restrictions to curb the spread of coronavirus, which come into force on Thursday, would compound economic and financial losses in consumer-facing sectors such as hospitality, with a knock-on impact on bank balance sheets.

“These restrictions will further hurt the activity of hotels, cafes and restaurants, many of which were the worst hit from an earlier lockdown and have not yet recovered, and are credit negative for Irish banks because the new restrictions will deteriorate the quality of loans while increasing impairments,” it said.

Moody’s highlighted recent Central Bank data, which showed a substantial number of firms, nearly three quarters in the case of hospitality, reporting decreases in turnover of more than 50 per cent since May. It also noted that 47 per cent of hospitality and 21 per cent of wholesale and retail outstanding loans were taking some form of payment break as of May, according to data on the State’s three largest banks, AIB, Bank of Ireland and Ulster Bank.

These sectors in aggregate account for about 22 per cent of these banks’ loan books.

“Therefore, the increasing impairment charges implied by worsened financial conditions at these firms will add to the already negative pressure on banks’ earnings,” it said.

AIB has set aside €1.2 billion to cover likely loan losses arising from Covid-19, the largest single amount of any lender, owing to its significant exposure to SMEs and property and construction companies.

Bank of Ireland ringfenced €937 million, while Ulster Bank set aside a higher-than-expected €278 million.

Both AIB and Bank of Ireland suggested that these first-half charges anticipated most of the banks’ expected losses, and hence second-half impairment charges should be much lower.

AIB said it had booked 80-90 per cent of its forecast full-year impairments while Bank of Ireland had booked about 78 per cent, Moody’s noted. “Nevertheless, the banks’ capital levels should provide a robust shield against losses and weakening asset quality,” it said.