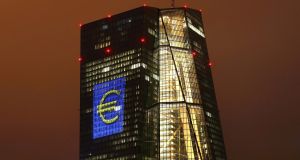 Households and businesses in the Republic, who are paying among the highest interest rates on loans in Europe, may have to wait years to enjoy the benefits of ultra-low central bank rates, according to Deutsche Bank analysts.

That is because European and Irish regulators continue to force Irish banks to hold “unfairly high” levels of expensive capital in reserve compared to other European banks, due to the perceived riskiness of their loan books as a result of the financial crash, they said.

“Irish banks are required to hold substantially more capital against their loan books as penance for the losses of the financial crisis,” said Deutsche analysts Robert Noble and Rohan Singhal in a report published on Tuesday, adding that this is “hampering” the flow of low European Central Bank rates to Irish borrowers, affecting household disposable income.

“Unfortunately in the near term it does not look like this is set to change,” they added.

However, they said that “in the next 10 years” Irish capital levels could “normalise” at lower levels as the effects of the financial crisis will have less of a bearing on banks’ accounting models. This will help both profit returns for the banks and “likely at least partial pass through to households”, they said.

The average rate charged on new mortgages in the Republic over the past 12 months to August was 2.83 per cent, compared to a euro area average of 1.35 per cent, according to Central Bank data.

An investor sell-off of Irish banking stocks as a result of the Covid-19 crisis so far this year – bringing their slump since January 2015 to 86 per cent, compared to 50 per cent for UK banks – means the market is pricing a “highly unlikely” repeat of bad-loan losses and capital raises enduring during the financial crisis, the Deutsche analysts said.

Irish banks’ capital reserve levels “should be comfortably enough” to cope even with loss rates seen in the financial crisis, even though that’s “an excessive benchmark”, the analysts said.

They noted how Irish lenders were now in a stronger position as a result of more cautious lending and households and businesses concentrating on lowering their debt burdens over the past decade.

Meanwhile, the analysts said that a potential tie-up between Permanent TSB and Ulster Bank – the latter’s UK parent NatWest is considering the future of its Irish unit – could result in a 59 per cent jump in the pretax profits of a combined entity if overall costs were cut by 10 per cent.

However, the high capital reserves that the banks must hold means that the return on shareholders’ invested equity – a key measure of a bank’s profitability – would only be 3 per cent, according to the report.

Bank investors typically see a return on equity of 8-10 per cent as a sign of a healthy company.

Even if regulators allowed Ulster Bank’s common equity Tier 1 capital ratio, a measure of capital reserves, to drop from 26.5 per cent currently to a “normalised” level of 14 per cent, the return on equity ratio would only increase to 5 per cent, the analysts said.

Sources have told The Irish Times that NatWest is actively looking at winding down Ulster Bank, with a merger with another Irish lender seen as a less likely alternative.

On a standalone basis it would take Ulster Bank “over five years to reach anywhere near normal returns”, the Deutsche report said.

The analysts rate shares in Bank of Ireland and AIB a buy, while they have a hold stance on Permanent TSB.

1 Basic income for all: Has the Covid crisis given us a new economic model?
2 ‘I don’t need to do any of this. . .I don’t actually need to work.’
3 Promontoria barred from pursuing doctor over Ulster Bank loan
4 Direct sea routes to Europe offer certainty in choppy Brexit waters
5 Only way is up for Stripe as valuation skyrockets
6 Fiona Reddan: Who’s afraid of Revolut? Not AIB and BOI it seems
7 Anti-alcohol zeal of public health experts peppers reopening debate
8 Online shoppers face unwelcome tax surprise
9 AIB revives €1bn-plus problem mortgages sale
10 Kinzen raises $2.2m as it helps clients fight ‘misinformation’
Real news has value SUBSCRIBE