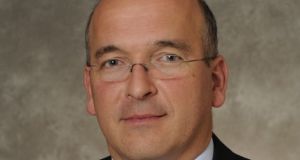 Fernando Vicario: he has worked for Bank of America for the past 25 years

Bank of America has named company veteran Fernando Vicario as the next chief executive of its EU banking hub in Dublin as financial firms prepare for Brexit to take full effect from the end of this year.

Mr Vicario, who has worked for the group for the past 25 years, will move from Paris to Dublin to succeed Bruce Thompson as CEO of Bank of America Merrill Lynch International DAC, which will be renamed Bank of America Europe DAC on November 1st, the company said on Tuesday.

Mr Thompson, as was previously announced, will relocate to the US to lead the group’s new institutional credit exposure management group.

The New York-based group completed the merger of its former main EU bank in London with the Dublin operation last December, resulting in a business with almost €59 billion of assets, about 800 employees, and offices in Leopardstown, Co Dublin, and Hatch Street in the city centre.

Bank of America, which took over Merrill Lynch at the height of the financial crisis in 2008, was one of the first banks to put in place concrete plans to deal with the uncertainty surrounding the UK’s decision in 2016 to exit the EU.

Transition Brexit arrangements are due to come to an end in December, ending UK financial firms’ unfettered access of the EU market irrespective of whether a trade deal is agreed by then.

Mr Vicario will also become chief country officer for Ireland, and report to Anne Finucane, chair of the Dublin-based banking entity, and Bernard Mensah, international president of the group.

“Fernando is one of our most experienced regional leaders, having worked for the company for over 25 years in multiple senior roles, including his current positions as head of corporate and investment banking for the European Union and head of corporate banking for Europe, Middle East and Africa, ” Ms Finucane and Mr Mensah said in an e-mail distributed internally.

“Fernando’s deep knowledge of our corporate client base and business across Europe will be critical as we seek to build further selective market share while executing on our responsible growth strategy.”