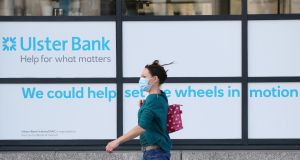 Ulster Bank parent NatWest is actively considering winding down the business as part of a strategic review. Photograph: Sasko Lazarov/Rollingnews.ie

Ulster Bank’s top directors told the Minister for Finance Paschal Donohoe on Wednesday that its UK parent had taken no decision yet on the lender’s future in the Republic, and that a strategic review was ongoing.

“Ulster Bank also confirmed that there is no set timetable for this review and that it is fully aware of the strategically important role that Ulster Bank plays in the provision of financial services to the Irish market,” the Department of Finance said in a statement after the virtual meeting between the Minister, Ulster Bank’s chief executive, Jane Howard, her chief financial officer, Paul Stanley, and the company’s new chairman, Ruairí O’Flynn.

The Minister told RTÉ radio’s Morning Ireland before the meeting that he was “deeply concerned about the speculation” surrounding Ulster Bank’s future in the Republic. It follows on from The Irish Times reporting last month that Ulster Bank’s UK parent, NatWest, was actively considering winding down the business as part of a strategic review.

NatWest, formerly known as Royal Bank of Scotland (RBS) and majority-owned by the UK government, is also weighing the merits of merging the business, with 88 branches throughout the Republic, with another Irish lender, though this is said to be a less likely outcome. Ulster Bank Northern Ireland is not part of the review.

The Covid-19 pandemic has added to the problems of the lender, which has struggled for years with high costs, low profitability and a requirement by regulators that it retain high levels of expensive capital reserves on its balance sheet.

Ulster Bank has been allowed by the Central Bank to return €3.5 billion of surplus capital to NatWest over the past four years – the equivalent of about a fifth of its parental bailout bill during the financial crisis.

However, it is still being forced to hold a capital reserves ratio of about 26 per cent, double what most banks have as a target – and leaving as much as €2 billion of “trapped capital” in the Irish business.

“We had a constructive meeting and an important discussion today with the Minister for Finance who is a key stakeholder in the review under way,” a spokeswoman for NatWest said. “Our priority is to continue to remain focused on supporting our colleagues in serving our customers in these difficult times.”

The Minister expressed his concern to the Ulster Bank directors and “emphasised the importance of Ulster Bank to the Irish financial services market, to the wider economy and to the communities it serves”, according to the department’s statement.

Mr Donohoe said staff, customers and other stakeholders must be informed promptly about any decisions being made. “In particular, he expects that staff representatives will be consulted and kept informed of developments,” the statement said.

The Minister highlighted that the Government had no formal role in the commercial decisions of Ulster Bank, with these a matter for the board and management of the bank and NatWest, which is 62 per cent owned by UK taxpayers.

NatWest said last month that “in the event of any changes being made to our strategy, these would be undertaken with full consideration of any impact on customers, colleagues and shareholders in the first instance”.

The Irish Times reported last Friday that US investment firm Cerberus was looking at making an approach for Ulster Bank’s €20.5 billion loan book in the Republic. A spokeswoman for NatWest said no talks were taking place with Cerberus.

As of June it had net loans of €20.5 billion, a mortgage market share in the “mid-teens” per cent, a 20 per cent slice of the SME market and “very strong corporate lending franchise”, according to Goodbody Stockbroker analyst Eamonn Hughes. It also employed about 2,800 people at the time, but has since sought to cut 266 positions.