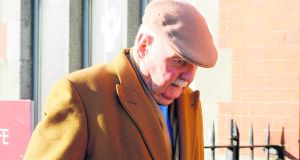 The Central Bank set up the inquiry into the actions of five former INBS executives and directors, including its long-standing managing director Michael Fingleton. Photograph: Alan Betson / The Irish Times

A multimillion euro Central Bank-ordered inquiry into the now-defunct Irish Nationwide Building Society (INBS), where public hearings started almost three years ago, is set to start final-phase hearings in the coming months after being delayed by months due to Covid-19.

However, much of the evidence will be heard in private session, as the inquiry deals with “confidential borrower information” surrounding 98 commercial loans made to nine borrowers before the property crash, a spokesman for the Central Bank said.

“The inquiry members have decided that this module will be divided into six hearings, five relating to specific loans (the loan hearings) and one in relation to context (the context hearing),” the spokesman said, adding that hearings will commence by the end of the year.

“The inquiry members are of the view that, given the nature and extent of the confidential borrower information that will be considered in the five loan hearings, it would not be practicable to hold these in public. Consequently, they have decided that these loan hearings will be held in private.”

Opening statements at the commencement of the phase, and the context hearing, will be heard in public by way of video conference technology as a result of the coronavirus pandemic.

The Central Bank decided in 2015 to set up the inquiry into the actions of five former INBS executives and directors, including its long-standing managing director Michael Fingleton.

The inquiry, which began public hearings in December 2017, was set up to look into seven sets of alleged regulatory breaches – or suspected prescribed contraventions (SPCs) – between July 2006 and September 2008.

These include allegations that INBS failed to process loans in line with policies, obtain property security for commercial loans, get proper valuation reports on assets it was lending against, or establish credit risk policies for profit-share agreements with developers during the boom.

The three-person panel presiding over the inquiry, led by chairman Marian Shanley, has so far examined evidence concerning three of the SPCs. The final four SPCs are being wrapped up in the final phase.

Since public hearings started, the Central Bank has reached settlement agreements with two of the five former INBS figures, former chairman Michael Walsh and one-time head of commercial lending Tom McMenamin. It dropped its case against Mr Fingleton (82) last December due to his ill health.

Former finance director John Stanley Purcell and one-time head of UK lending, Gary McCollum, are the only remaining subjects to the inquiry.