Financial Conduct Authority says they have no value for ordinary investors 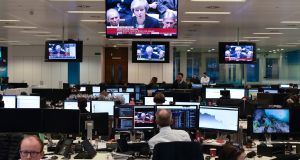 Shares of the spread-betting firms that offer the derivatives, such as CMC Markets (pictured), slid in London trading.

Britain’s financial watchdog has banned the sale of cryptocurrency derivatives, saying they have no value for ordinary investors.

The Financial Conduct Authority, which first proposed such a ban in July 2019, said prohibition would save £53 million (€58m) a year in losses for retail investors once it comes into force on January 6th.

Customers with existing holdings will be allowed to remain invested as long as they wish.

Leverage limits introduced for contracts for difference on cryptoassets in 2018 have gone some way to reducing harm, the FCA said, yet investors were still losing significant sums on the products and the restrictions “do not address the concerns we have with the underlying cryptoassets and retail consumers’ inability to value these derivatives reliably”.

The ban does not apply to trading the cryptocurrencies themselves. Bitcoin and Ethereum are not regulated by the FCA.

“We have evidence of this happening on a significant scale. The ban provides an appropriate level of protection.” – Bloomberg