Cantillon: Inconceivable that the IAIM will step back from all lobbying activity for a year 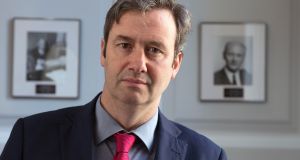 Michael D’Arcy will have to await a decision from SIPO on whether his move breaches the terms of the legislation. Photograph: Dave Meehan

The controversy over former junior minister Michael D’Arcy taking up the job of chief executive of the Irish Association of Investment Managers (IAIM) will just not blow over.

The association says it has taken legal advice and the appointment does not breach lobbying legislation – members of the Opposition have written to the Standard in Public Office Commission (SIPO) querying this point.

Under the legislation, certain officer holders – including Ministers of State – must have a one-year cooling-off period before lobbying bodies for which they previously worked, or being employed by someone doing such lobbying.

The association says D’Arcy will not undertake lobbying including of his former department – which is finance, which oversees policy towards the funds and investment sector – for the one-year period. They also further say the IAIM itself will not engage in lobbying for that period; in fact, the organisation says it has not lobbied since 2017 (when it was D’arcy who was lobbied) and has made no returns to the lobbying register since then.

No doubt D’Arcy will have plenty of other work to do in strategic planning and generating new membership. But while the definition of what is lobbying which needs to be registered may be narrow, the association’s own website makes it clear: “We are actively involved in policy development in Ireland and have built up valuable long-term relationships with regulators, policymakers and other stakeholders.”

These include, for example, regular responses to consultations on legislation and regulatory proposals, as published on its website.

It seems inconceivable that the association will step back from all of what most of us would think of as lobbying activity for a year, even if that activity does not technically qualify as lobbying for the purposes of disclosure in the register. Especially with a no-deal Brexit on the horizon and all the implications that has for the financial sectors in the EU and the UK.

D’Arcy could have sought special clearance from SIPO, but chose not to do so. It now looks as if the controversy of whether this breaches the letter- or spirit - of the legislation will drag on.