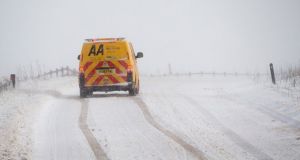 New York-based Further Global Capital Management, founded by banker Olivier Sarkozy in 2017, ‘will work with AA Ireland management as the business embarks on its next phase of development’, the Irish company said in a statement on Thursday. Photograph: Danny Lawson/PA Wire

A US private equity fund led by former French president Nicolas Sarkozy’s half-brother has acquired a controlling stake in AA Ireland, the roadside assistance and insurance intermediary company, for a sum understood to be in excess of €240 million.

The deal marks an exit for Carlyle Cardinal Ireland Fund and Carlyle Global Financial Services Partners, who acquired the business for €156.6 million as it was spun off by UK-based AA plc in 2016.

New York-based Further Global Capital Management, founded by banker Olivier Sarkozy in 2017, “will work with AA Ireland management as the business embarks on its next phase of development”, the Irish company said in a statement on Thursday.

“With the experience, expertise and backing of Further Global, AA Ireland will continue to operate as an Irish-based company headquartered in Dublin,” said AA Ireland chief executive Brendan Nevin.

“The company will continue to serve our customers with a team of almost 500 people committed to being the leading roadside assistance provider and insurance intermediary in Ireland.”

Olivier Sarkozy, the former head of Carlyle Group’s financial services unit, is best known in Dublin financial circles for being involved in that group’s part in a group of private equity firms – known as the Mallabraca consortium – that had been looking at taking a major stake in Bank of Ireland in 2008, at the start of the financial crisis.

Dublin-based Cardinal Capital, co-founded by financiers Nick Corcoran and Nigel McDermott, were also involved in that consortium before joining forces with Carlyle to set up the €290 million Carlyle Cardinal Ireland Fund in 2014.

This would go on to invest in a number of companies in a recovering economy, including well-known names such as chocolatier Lily O’Briens, cooked meats company Carroll Cuisine, AA Ireland, payments firm Payzone and the City Bin waste management business.

Spokesmen for Further Global and Cardinal and a spokeswoman for Carlyle declined to comment on the price of the AA Ireland transaction.

AA Ireland posted €13.7 million of net profits in the year to the end of January on sales of €62.4 million, according to accounts filed with the Companies Registration Office in August. The report said that Covid-19 travel restrictions in Ireland earlier this year had dented turnover, affecting sales of travel insurance and also resulting in the temporary closure of car test centres.

The company has paid €35.8 million of dividends to its parent company in the past three years, funding payouts to its private equity bankers as well as the servicing of debt.